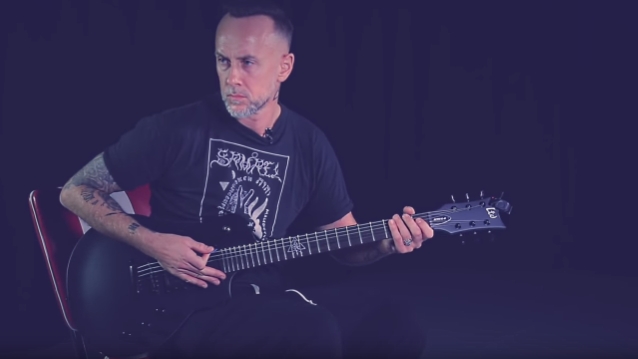 Andrew McKaysmith of Australia's "Scars And Guitars" podcast recently conducted an interview with frontman Adam "Nergal" Darski of Polish extreme metal veterans BEHEMOTH. You can listen to the entire chat via the audio widget below. A few excerpts follow (transcribed by BLABBERMOUTH.NET).

On how BEHEMOTH plans to expand its sound beyond the band's latest studio album, "I Loved You At Your Darkest":

Nergal: "With every record, we have a different approach. It's a different approach here. It was a different approach with 'The Satanist' and so on. It's hard to say. It's way too early to judge. I'm more into creating a certain atmosphere for the record than thinking, 'Oh, let's show off here. Let's show off here.' I'm more a 'song' kind of guy. The older I am, the more of a song kind of guy I am. I think you can hear it on 'I Loved You At Your Darkest'. It's a very song-based record. It's even more song-based than 'The Satanist'. That's what I like. I'm thinking we'll be moving toward that direction. Then again, maybe it's going to go more crazy again, more radical. But then what I'd like to do is, I like diverse stuff. I like the opposites. I like when something is really crazy and brutal, I like to level it out with something that is mellow. Also, my experience, and that's what people pointed out when listening to 'I Loved At Your Darkest', is that ME AND THAT MAN [Nergal's folky side project] must have had some impact on the record. It's true. I'm not saying this is a blues-country record because it's still a pretty fucking radical album. It's massive and it's heavy as fuck and so on and so on. But ME AND THAT MAN just opened me up for new experiences — it just encouraged me to do other stuff. So, I think you can definitely hear it on 'I Loved You At Your Darkest' and I'm happy with it. I'm honestly happy with it."

On "Bartzabel", one of the more slow and atmospheric songs BEHEMOTH has recorded:

Nergal: "There is a risk when you make that kind of song because we've never done a song like this. 'Bartzabel' is definitely going to stand out, but at the end of the day, you never know because it's unpredictable if people are going to dig it or they're going to bury it, like, 'Oh, that's crap. That's shit.' Just take a look at some other bands and sometimes they just come up with something and when it's out for some time, people think it's shit and then with time, it just grows and people, sometimes it's one or two or three decades and people realize 'It's such a classic.' Or, the opposite. [Laughs] It's a risk, but that's exactly what makes our profession so exciting. I would fucking hate doing stuff that is so predictable and just follows a certain path just to get my pay and pay my bills. I would hate my life, then. But with this approach that we accomplished again on 'I Loved You At Your Darkest', it's still BEHEMOTH, but it's adventurous. Personally, I love 'Bartzabel'. Even in the studio when the vocals were not done, I didn't know exactly where we're going. It had this loose approach. I was, like, 'Shit, how am I going to approach it vocally? I definitely don't want to scream over this — I don't want to kill the goth vibe of the song.' I was, like, 'I need to do something else.' Then I started fucking around with vocal layers. Then, when I did that, I did some demos and I was like, 'Holy fuck. It has a BATHORY vibe and it's something else.' I was like, 'I think I'm loving it.' I followed it and now live, people love that song. People love that song and I love the song and I'm really happy. 'I Loved You At Your Darkest' is BEHEMOTH's 11th album. I'm very happy with the record and I'm super proud of it, but at the end of the day, I remember what one of the JUDAS PRIEST guys said: At the end of the day, with every new record, if you can take away one classic that's going to stay in your setlist for the next decade, you know that you have accomplished it. It's so difficult, the older you are, the more experienced you are, the bigger your back catalog, the more difficult it is to bring something new to the table. Just look at SLAYER or even JUDAS PRIEST or any other band. It's like they always play the old stuff, so I'm really happy that 'Blow Your Trumpets Gabriel', and 'O Father O Satan O Sun!' and 'Bartzabel', these are the songs we will probably be playing for another 10 or 20 years because people want to hear them. It's very satisfying."

On the reaction to ME AND THAT MAN's 2017 "Songs Of Love And Death" debut, which found Darski playing country-blues:

Nergal: "I was expecting more hate. I was expecting more people being not very pleased with me singing or trying to sing, depends on how you see it, but, before anything, most of the people, they realized that this is one hundred percent Nergal and this is one hundred percent honest. Honesty is the number one factor when it comes to artistry. I'm still pretty happy with that record. Of course, I would sing stuff better now because I have some more knowledge and experience. I'll prove that on the next album because we're making it. But it was a very important time for me. I'm happy I did that. Of course, BEHEMOTH is my mothership and this is my most precious child and it's my priority, but then, I would really hate to sum up my artistic life in one genre and in one band, only. I still feel like I'm fully accomplished, if you know what I'm trying to say. I know that I have perfected BEHEMOTH's artistry. I know that. We are pretty fucking solid. I always ask myself 'What if there's other genres that I can be good at? Why am I not trying it out? I should.' Even if you fail and it's a message when people who ask me about stuff, it's a message to other people too: It can be sports, it can be crafts, it can be anything. If you feel if you have some interests and hunger in trying out new [things], just do it. If you fail, so what? You're not going to die from it. Just do it. You never know. Maybe you try it out and there's a new adventure behind it and it's going to open up a whole new world for you."

"I Loved You At Your Darkest" was released last October via Metal Blade.