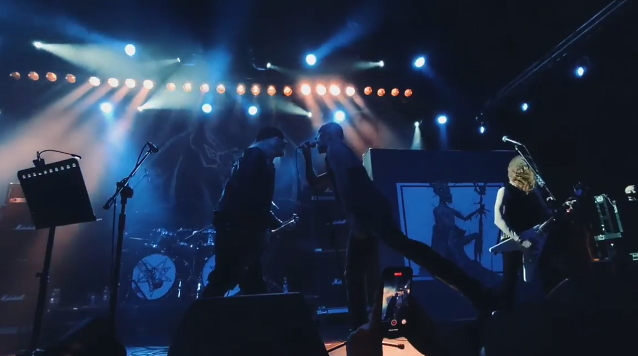 BEHEMOTH frontman Adam "Nergal" Darski joined TRIUMPH OF DEATH on stage on Sunday, December 15 at the "Merry Christless" event at Progresja in Warsaw, Poland to perform the HELLHAMMER song "Aggressor". Video footage of his appearance can be seen at this location (courtesy of Instagram user "silenceandfire").

Nergal took to his social media earlier today to share a few photos of yesterday's concert and included the following message: "Sooo... in 1992 with BEHEMOTH we recorded our first ever cover by legendary HELLHAMMER, 'Aggressor'. There was no way we could find the lyrics so I simply improvised... which is pretty obvious when listen to it. It was pre-internet times kids, I was a poor metalhead, I couldn't even afford buying an original LP (was there even a lyric sheet?), not even mentioning none were available in Poland. Last nite I had an immense pleasure and honor to join one of my heavy metal heroes, personally a friend, to perform 'Aggressor' on stage in Warsaw during Merry Christless festival (WITH lyrics this time) The circle (of the tyrants) is completed. I'm beyond fulfilled and eternally grateful for this life's opportunity Tom! Loved EVERY fuckin' second of it!"

HELLHAMMER existed for a mere two years, from May 1982 to May 1984. During this time, the band wrote material for three demos, one 12-inch EP, and the legendary "Death Metal" compilation album, along with a number of unrecorded songs. In light of HELLHAMMER's now mythically iconic status in the global metal scene, it is almost inconceivable that most of this music had never been performed life.

The resurrection of the music of HELLHAMMER has been an idea Fischer and Martin Eric Ain have discussed for many years, sparked not least by their renewed collaboration in the reformed CELTIC FROST in the 2000s and by the years of work on Warrior's second book "Only Death Is Real" (2009), which details the history of HELLHAMMER and early CELTIC FROST.

The first steps towards the realization of TRIUMPH OF DEATH, named after HELLHAMMER's most infamous song and intended to be a very respectful and authentic tribute to HELLHAMMER, were taken years ago. TRIUMPH OF DEATH consists of some of Warrior's closest friends; individuals who not only love this music but truly understand it. The lineup emulates HELLHAMMER's final incarnation of April-May 1984, when the group had added an additional guitarist. 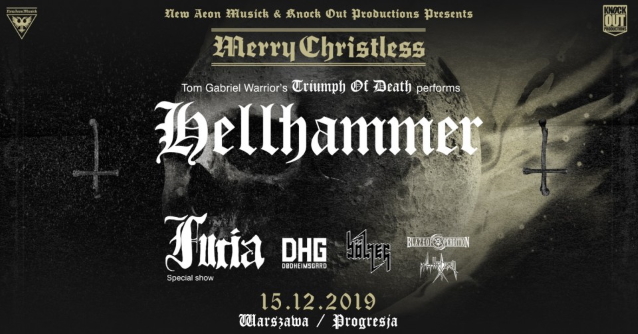