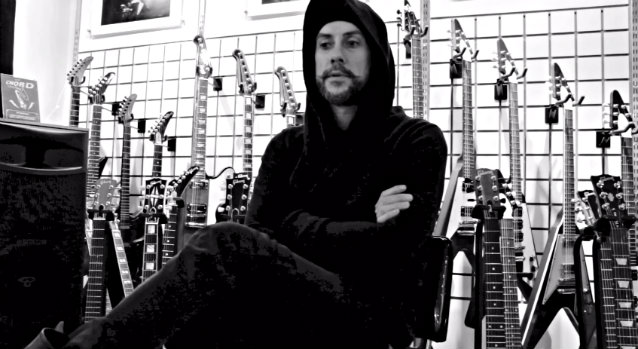 Polish extreme metallers BEHEMOTH will release their long-awaited new album, "The Satanist", on February 3 in the U.K., February 4 in North America and Poland, February 5 in Japan, and February 7 in the rest of the world. Pre-order bundles, include: CD, LP, t-shirt, as well as the deluxe box set, and are available at metalblade.com/behemoth in North America, nuclearblast.de/behemoth in Europe, and on behemoth-store.com (digibook and box).

BEHEMOTH's video for the new single "Blow Your Trumpets Gabriel" can be seen below. This visual masterpiece was produced by Grupa 13 and is one of BEHEMOTH's most unsettling and unique works to date.

Footage of BEHEMOTH frontman Adam "Nergal" Darski talking about the "Blow Your Trumpets Gabriel" video concept can be seen below.

Darski states about the video: "Yes, we took all the time in the world to complete this project. And we did everything that was humanely possible to accurately express our vision. We crossed the Rubicon.

"'Blow Your Trumpets Gabriel' is an ecstatic manifest of our unrestrained artistic will, where we dare to reach out beyond the limitations of the heavy metal genre. And it's only the beginning."

"I wanted to incorporate some of my DNA into the art," Nergal told Australia's Heavy magazine about having his blood included in "The Satanist" artwork.

Fans can still order the limited edition 12-inch EP of "Blow Your Trumpets Gabriel" (1,000 white and 1,000 black, 180-gram vinyl) that will be released as a gatefold with each copy hand numbered and signed by the band. The 12-inch EP can be pre-ordered via BEHEMOTH's webstore, Nuclear Blast Europe webstore, and Metal Blade Records U.S. webstore.