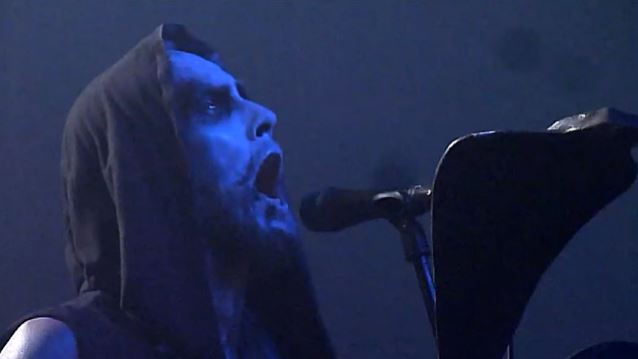 Guitarist/vocalist Adam "Nergal" Darski of Polish extreme metallers BEHEMOTH was interviewed at the 2015 edition of the Inferno festival, which was held April 1-4 in Oslo, Norway. You can now watch the chat below.

Speaking about BEHEMOTH's mindset during the making of the band's tenth album, "The Satanist", which came out in February 2014, Nergal said: "It was the first time we stopped overthinking and we just grabbed instruments and just… I would just punch chords. And that's what you hear on the record. So the music that you hear was exactly what was played here [points to his chest]."

He continued: "I've always been known for overanalyzing and just being very intellectually driven. So in the context of 'The Satanist', I tried to limit the impact that my brain [had] on the record, and rather than thinking too much [while making] the record, I would just start feeling it and trying to bring out my emotions and channel them through riffs, through music and make the music as natural as possible, and that's what you hear on the record."

Asked how the response has been to "The Satanist", Nergal said: "I mean, I'm overwhelmed, honestly. I know it's suspicious when all the people like the record, and when media praises the record, but that's what's happening in this particular case. I just had this feeling this is definitely our opus magnum. I'm not sure if it should be continued after such a… I'm just being honest here. I'm so happy with the record and the response and everything. It's been a year now, and I haven't really done any extreme metal music ever since, because I'm so happy with what's happening now. So we're just gonna give it some time. And let's just talk one or two years down the road and see what happens then. But we're definitely gonna take time."

The definitive BEHEMOTH biography, "Behemoth: Devil's Conquistadors" by Lukasz Dunaj, was released in February via Metal Blade. The 490-page, hardcover tome includes quotes and anecdotes from current and former members that provide context and details in addition to the author's narrative, plus interviews with Tomas Krajewski, Rob Darken, Graal, Havok, and more. The artistically presented pages are splattered with old photos of the band, flyers, lyric sheets, etc.

The English-language version of Darski's autobiography, "Sacrum Profanum", was released on March 31 via Jawbone Press. The book received editorial assistance from Mark Eglinton, co-author of Rex Brown's memoir, "Official Truth, 101 Proof - The Inside Story Of Pantera".

Originally released in Poland in October 2012, "Sacrum Profanum" was previously described by Darski as "a really long in-depth interview."