"Behemoth: Devil's Conquistadors" by Lukasz Dunaj serves as the definitive BEHEMOTH biography. The book, officially blessed, or rather damned, by BEHEMOTH, is an in-depth look at the history of the events that materially influenced the band. As Dunaj points out in the intro, this isn't "Poland's response to MOTLEY CRÜE's biography 'The Dirt'." Simply put, "Behemoth: Devil's Conquistadors" is the story of BEHEMOTH, their music, their ultimate rise to the upper echelon of metal and becoming a household name in their native homeland, Poland.

A 490-page, hardcover tome that is being released by Metal Blade in February, "Behemoth: Devil's Conquistadors" includes quotes and anecdotes from current and former members that provide context and details in addition to the author's narrative, plus interviews with Tomas Krajewski, Rob Darken, Graal, Havok, and more. The artistically presented pages are splattered with old photos of the band, flyers, lyric sheets, etc.

Pre-orders are available now at metalblade.com/behemoth, and include a bundle with an exclusive shirt available ONLY with this pre-order. The passages below serve as previews of the book.

From the foreword by Krzysztof Azarewicz: "If, as a cultural anthropologist, I were to point to a single cosmic force which BEHEMOTH's music expresses, I would name it not Satan but Dionysus. A deity that represents not only the intoxicating influence of cosmic energies and earthly benefits, but also their benevolent healing properties. A deity of strength and pride. A deity of creative might."

BEHEMOTH frontman Adam "Nergal" Darski discusses the acquisition of his first electric guitar: "The first communion was a very important moment for me. I know this sounds ridiculous, but it's true. Of course, not as a religion experience — I didn't understand anything and couldn't care less. Same as all the other kids. We all stood there with our votive candles and waited for one thing. Cash. The first communion must be one moment when you get the most money you're ever going to get as a child. And for this money, I bought myself my first electric guitar. Not a bike, no Legos — a guitar."

In related news, BEHEMOTH is currently leveling stages throughout North America on a mammoth co-headlining tour with legendary death metal practitioners/labelmates CANNIBAL CORPSE. The month-long winter live takeover kicks off today in New Orleans, Louisiana and will wind its way through nearly three-dozen cities, coming to a close on March 7 in Ft. Lauderdale, Florida. Support comes from two of Sweden's finest metal exports: AEON and TRIBULATION. 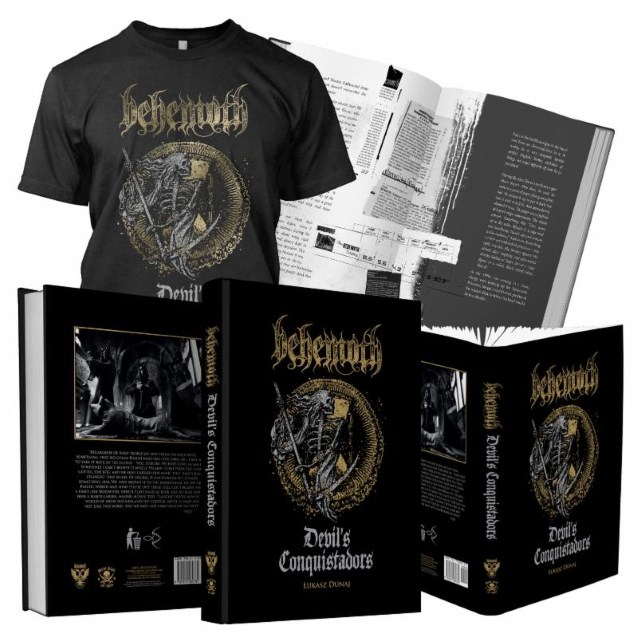