Nergal commented: "What the fuck!? I'm sitting here in my home studio trying to put a new song together while this news is coming through leaving me speechless... it's unheard of: BEHEMOTH wins 'Best Drummer', 'Best Live Act' and 'Best Vocalist' for 2008 in Terrorizer. Being awarded by the readers of the most elite and opinion-forming magazine on Earth is more than huge honor. It's a fucking blast! From the depth of our hearts: Thank you so fucking much! It means everything to us and it will certainly give us a massive kick to write the strongest album we can! Now we owe you, fuckers!"

BEHEMOTH is in the final stages of the songwriting process for its upcoming, as-yet-untitled album. The record is tentatively expected sometime in the fall via Metal Blade (USA) and Nuclear Blast (Europe). BEHEMOTH mainman Adam "Nergal" Darski and his bandmates are planning to enter the studio in the middle of February.

"Ezkaton" features seven tracks, one brand new song titled "Qadosh", a live recording as well as a new studio version of "Chant For Ezkaton 2000 e.v.". Also included are live versions of "From The Pagan Vastlands" and "Decade Ov Therion" plus covers of THE RAMONES' "I'm Not Jesus" and the MASTERS HAMMER track "Jama Pekel". The EP was made available as a limited-edition box set that includes four picture-disc seven inches, a BEHEMOTH pendant and the CD all packaged in a deluxe box. 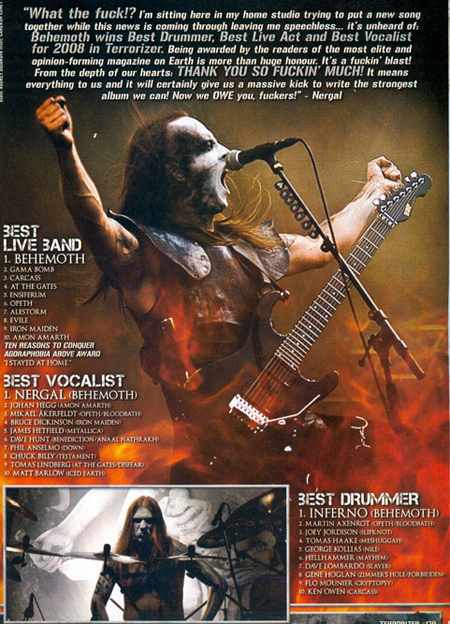