Guitarist/vocalist Adam "Nergal" Darski of Polish extreme metallers BEHEMOTH — who kicked off their three-week "Russian Satanist" tour on May 10 — has posted the following message (in Polish) on the band's Facebook page:

"We've been stopped by the [Russian] immigration services for 'wrong visas.' When I said that we will not move an inch from the club without someone from the Polish embassy, they threatened to force us out. They took us in a bus, accompanied by 10 officers, to the building of Federal Migration Service. We tried to reach polish embassy in Jekaterinburg but no one is answering the phone.

"If possible — please copy this message and pass it everywhere you can. We may expect a multihour hearing.

"The concert is off for sure. The only thing we want is to get back to the hotel safely and then — to Poland. No matter how hard we try — we cannot pass it all."

"The Satanist" was released on February 3 in the U.K., February 4 in North America and Poland, February 5 in Japan, and February 7 in the rest of the world. The CD was produced by BEHEMOTH, Wojtek and Slawek Wieslawscy and Daniel Bergstrand at Hertz Studio. The effort was mixed by Matt Hyde (SLAYER) and mastered by Ted Jensen (METALLICA, AC/DC) at Sterling Sound in New York City. The cover art for "The Satanist" was painted by renowned Russian painter and occultist Denis Forkas. The paint used included some of Nergal's own blood. Additional art and design was completed by Metastazis (PARADISE LOST) and Zbigniew Bielak (WATAIN, GHOST). 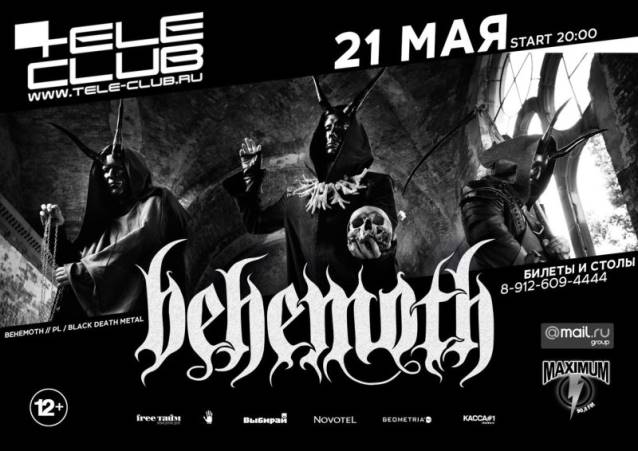