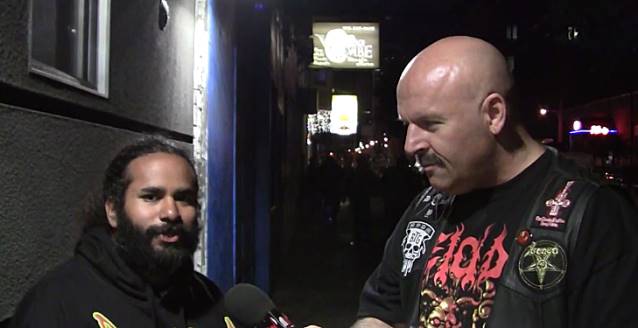 Capital Chaos TV conducted an interview with guitarist Hiran Deraniyagala Michigan's BATTLECROSS on October 18, 2013 at Slim's in San Francisco, California. You can now watch the chat below.

BATTLECROSS' latest album, "War Of Will", sold around 2,700 copies in the United States in its first week of release to land at position No. 134 on The Billboard 200 chart. The CD landed at position No. 2 on the Top New Artist Albums (Heatseekers) chart, which lists the best-selling albums by new and developing artists, defined as those who have never appeared in the Top 100 of The Billboard 200.

"War Of Will" was released on July 9, 2013 via Metal Blade Records. Co-produced at Audiohammer Studios in Sanford, Florida, the sophomore effort from Detroit's newest soldiers of steel is destined to become a heavy metal classic for fans of all sub-genres. The drum tracks on the CD were laid down by Shannon Lucas (ex-THE BLACK DAHLIA MURDER) following the departure of Mike Kreger last year.

The follow-up to 2011's "Pursuit Of Honor", "War Of Will" features a guest guitar solo by producer Jason Suecof. Eyal Levi handled engineering duties on the record and ARMORED SAINT's Joey Vera, who mastered the band's cover version of PANTERA's "Fucking Hostile", mastered the effort.

"War Of Will" track listing: