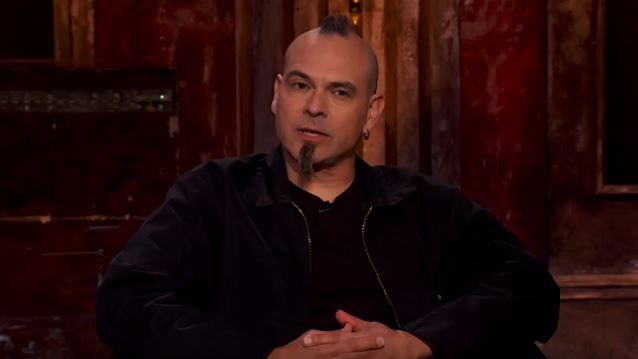 In a new interview with music writer Joel Gausten, FATES WARNING/ARMORED SAINT bassist Joey Vera discusses FATES WARNING's brand-new album, "Theories Of Flight", his work with the all-star band MOTOR SISTER (alongside members of ANTHRAX and THE CULT) and the key to ARMORED SAINT's longevity. An excerpt from the chat follows below.

Joel Gausten: You've been with FATES WARNING for a good 20 years now. What keeps that experience fresh for you? What keeps you coming back to the band?

Vera: The fact that they want me to stay there! [Laughs] I've known these guys for a very long time, and I'm actually blown away that I've been playing with them for as long as you've mentioned. I have the best time with these guys. For me, this isn't my baby that I'm incubating, maybe the way ARMORED SAINT is. It's just so close with ARMORED SAINT, and there are a lot of blood ties with them. With that comes a lot of stress and a lot of emotional fragility, and baggage comes with it. There's just all kinds of stuff. With FATES WARNING, although I feel like I'm family with everyone, I don't have that sort of pressure. The stress never really enters that equation for me. For me, being involved in FATES WARNING is really a lot of fun. Everyone in the band gets along famously. That's not to say that we don't have our hurdles to conquer. Everybody does; that's just life. But for some reason, this group is a lot of fun; we just have a great time together. Musically, it's very satisfying and challenging. Aside from [drummer] Bobby [Jarzombek] making me a better bass player, [guitarist] Jim Matheos has made me a better bass player as well — and a better musician all around. The music that he writes is intricate; there's a lot going on and it forces you to think and evaluate what's going on and how to fit yourself within that context. It's very interesting for me. There are a lot of reasons for me to remain in FATES WARNING. It's making me a better musician with each record and each tour. I'm super grateful and humbled and honored to be a part of this thing.

Joel Gausten: You've been in two bands with particularly solid histories — 30-plus years with ARMORED SAINT and 20 years with FATES WARNING. Both bands have put out really great records in the last year. For you, what has been the key to longevity for both bands in this industry?

Vera: That's a good question. Both bands have been able to maintain a life on their own island. Although ARMORED SAINT was caught up in an identity crisis early in our career, when I look back on both bands in hindsight, both have been able to do their own thing and do it honestly without trying to appeal to a trend or a situation or to fans. I think both bands make music for themselves first. As a result of that, both bands have been able to maintain a life. I think both bands were fortunate early on to attract a super loyal following of fans all over the world that have been gracious enough to follow along with us through our ups and downs. In the long run, the fans who stick around have been there for a very long time, and they support us through thick and thin. Some of them have favorite records more than others, but in the end, they've been very loyal and supportive of everything that both bands put out. With those two different groups, I can safely say that we're very lucky to have all of those fans who've followed us all this time. We can't do any of this without them, and we're able to live on those islands because of the support from the fans. I think the key, really, is that both bands have been super honest with themselves and have made music pretty much for themselves.

Joel Gausten: You mentioned an early identity crisis with ARMORED SAINT. Are you specifically referring to the major label era and the mid-'80s period?

Vera: We went through an identity crisis during our years with Chrysalis [Records]. We had a hard time "fitting in." If you remember in the early and mid '80s, heavy metal was splintering. In the beginning, heavy metal was just heavy metal. It was just one branch, but then that branch started splintering off into smaller branches. We found ourselves caught between the thrash metallers and hair metal. In America, we had a hard time relating to one or the other or both. Sometimes we were too heavy for the hair bands or the hard rock/heavy metal bands, and we weren't heavy enough for the thrashers. We found ourselves trying to appeal to both. In the end in hindsight, it was maybe the wrong thing to do, because we just sort of kept doing our own thing. My biggest example of that is the record "Raising Fear" [1987]. We had a lot of pressure from Chrysalis at the time. They hired a songwriter to work with us, and we actually agreed to do it. It didn't last very long, but we actually were working with a songwriter for about a month. It was like the worst experience ever, and we ended up firing him. I'm glad we did. [Laughs] It was one of those confusing times where we didn't know what to do; we were getting pressure from the label and even management. But you know, you've got to go through those things. I think it was good for us in the long run, because we ended up doing our own thing in the end anyway, for better or worse. I look back on our whole catalog and where we are now, and I say, "Well, we still don't really fit in anywhere, but that's actually what we really wanted all along." [Laughs] It's a funny thing, but sometimes it takes going through all that to get to where you want to go.