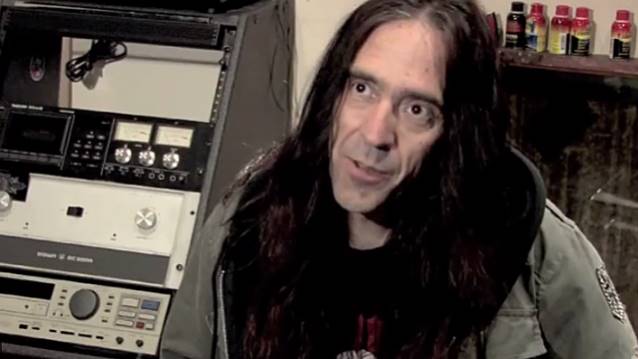 "Fuck it. Last week I said I'd do this, so here it is. And if this gets picked up by any sites, all I have to say is, I can say whatever the fuck I feel like on my own page. If you don't like it, don't read it. I'm in the US of A and this is my free speech.

"The last straw [that led to my split with TESTAMENT was as follows]. [I was] sitting at the bar in the Seoul/Incheon airport [in South Korea], with a couple of the entourage, and Chuck [Billy, TESTAMENT singer] walks up and casually says he just spent three grand, cash, on a first-class upgrade. [He] said he thought it was worth it to be more rested for the first Euro show, [which was to take place] in a couple days. Then, of course, Eric [Peterson, guitar] gets up and walks over to the ticket counter (gotta keep up with the Jones's or the Kardashians or whoever lol).

"[Here's some] perspective. As my employer, in a business I helped start and put (at that time) just over 20 years into — 12 then 8 — and helped build from nothing the first time and helped resurrect from almost nothing the second time, this $3K for one first-class upgrade stuck in my mind, and when I got paid a couple weeks later, I was just thoroughly disgusted and done with TESTAMENT. 'My employer' thinks that his ass being in a more comfortable seat for one ten-hour flight is worth more than I was worth for five festival performances (on two continents — neither this one), a half dozen shitty flights plus a week and a half away from home and my family.

"I don't make anything off anything else, so it's not a situation where I get anything off the back end. In other words, promoting the band only helped my employers — not me.

"I don't know actual numbers‬ — no one ever told me — but I heard rumors the band made $100K just for the one Korean show and watched both Chuck and Eric spend $$$ like it was true (of that I got about $700).

"Tune in next week if you want to read about a 'band meeting' a few years ago in Sao Paulo, Brazil (the last time I tried to talk to those guys about $$$) and hear a few of the things that were said…