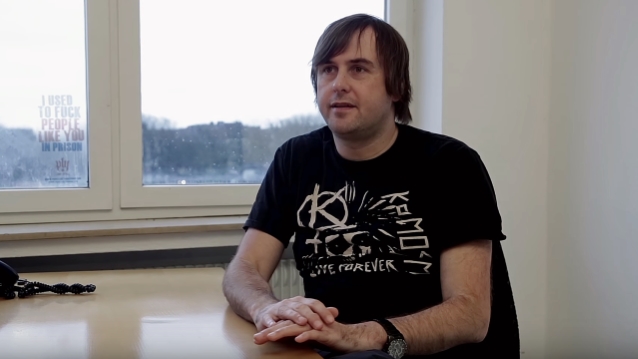 NAPALM DEATH vocalist Mark "Barney" Greenway recently spoke with France's No Name Radio. The full conversation can be streamed below. A few excerpts follow (as transcribed by BLABBERMOUTH.NET).

Barney: "I think it turned out to be a really good album, which I didn't quite know at the time. Every album is always, 'Is it going to be good? Are people going to care?' But it's worked really well. I think the stylistics on there as well — the amalgamation of different styles of the band — really fits together exceptionally well, more so than even previous albums. I think it worked out really well, and the reception to it was really positive. It couldn't be any more positive."

On whether the group plans to release a new album soon:

Barney: "It will definitely be [2019]. It could be any time [in 2019], just because we've been away so much touring. We did plan to have it [in 2018], but it hasn't worked out that way, because you kind of need to be at home for a while, and we haven't really been. But it doesn't matter, because people still want us to go and play, so the album can wait. It's not essential right now. Of course, we'd love to have it now, but if it doesn't work out that way, then that's the way it goes."

Barney: "As far as the different places around the world that we play, people are people at the end of the day. There's always the question in interviews, 'Oh, what do you think of the' — for example — 'Bulgarian fans?' if you're in Bulgaria. 'What do you think of the Portuguese fans?' if you're in Portugal. That's almost not a question, because people are no different. Okay, yeah, there's some places that go through a different experience from what we do in Europe in terms of everyday lives, but people are still people at the end of the day, so we tend not to believe the hype. If people tell us to be scared of going somewhere, we'd rather find out for ourselves than accept a stereotype."

On his devotion to the animal rights cause:

Barney: "It's not a cause — it's just humanity. It's basic humanity. It doesn't have to be portrayed as a cause or an issue. They're sentient beings — they're very much like us, albeit they cannot communicate directly with us, [with] most of the same emotions and physical experiences. The way that human beings treat animals sometimes, to me, it's just inhumane. It's not a cause for me — it's basic humanity."

Barney: "Signing sessions and meet-and-greets and stuff like that, it's quite a difficult thing. It's always been a natural thing us to not be above other people, so sometimes meet-and-greets and autograph things can kind of enhance that a little bit. It can be quite awkward sometimes, but then we understand that people want to meet us, and that's a friendship on a basic level, so we do it, because we don't want to seem unfriendly. But it is difficult, because people can come and meet us anywhere. We're a lot more accessible than other bands. It's a tricky one to balance."

On whether NAPALM DEATH plans to commemorate its 30th anniversary:

Barney: "A lot of bands, they do, 'Oh, it's 25 years of this or that.' For us, we're an evolving band. We don't need to look backwards. Yeah, of course, whatever album you care to mention, people might see as a very important album, but sometimes people use that 25 years or 30 years [angle]... in order to get bigger guarantees, bigger money."

On his thoughts on NAPALM DEATH's career:

Barney: "I never looked at it as a career. It was never a career for me, because 'career' makes it sound like 9-to-5 job feeling. It was never like that for me. I wanted it to be a very organic, natural experience, and for the most part, it has been."