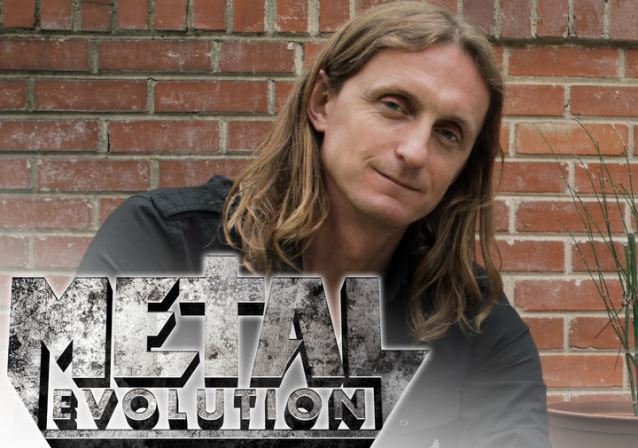 On September 7, CC Getty of the "Metalheads United" show on MetalNationRadio.com conducted an interview with Sam Dunn of Banger Films Inc.. You can now listen to the chat using the widget below.

Dunn is currently working on the "lost" episode of the "Metal Evolution" series focusing on "Extreme Metal". The episode will take viewers on an unprecedented journey across Europe and North America to tell the story of metal's most aggressive and misunderstood sub-genre.

After an enormously successful Indiegogo crowdfunding campaign raising nearly $40,000, Grammy-nominated and Juno-winning Banger Films is embarking on a final push to create the "Extreme Metal" episode.

"Our first Indiegogo campaign was a huge success and we were blown-away by the support of the metal community," says Dunn. "The research, writing, travel and filming is now complete and we've captured some amazing interviews and footage. But we need to turn this footage into an episode!" The new campaign kicked off August 9. Details of the campaign, including a brand-new trailer featuring exclusive footage from Banger's "Extreme Metal" filming trip, can be found here.

Originally broadcast on VH1 Classic (USA) and Much More Music (Canada), Scot McFadyen and Sam Dunn's series "Metal Evolution" presented 11 episodes based on the Heavy Metal Family Tree originally shown in their groundbreaking documentary "Metal: A Headbanger's Journey". Host and metalhead-turned-anthropologist Dunn crisscrossed the globe exploring the vast history of heavy metal across its 40-plus year history, covering everything from the pre-history of metal and shock rock to grunge and thrash metal. But one very important episode was left out: "Extreme Metal". "Some of the networks felt that extreme metal was too heavy or too niche. We're out to prove that extreme metal is metal's most vital sub-genre and that metal would probably die without it!," says Dunn.

Tom Gabriel Warrior, legendary frontman for extreme metal bands HELLHAMMER, CELTIC FROST and TRIPTYKON, was interviewed by Dunn for the episode. "It was an absolute honor and a pleasure to host Sam and his outstanding team at my place in Zurich," said Tom. "That extreme metal has been overlooked in this series so far is a scandal. This episode is utterly overdue!"

Contributors' support for the new Indiegogo campaign will cover costs of finishing the episode which includes editing, archival and music licensing, onlining, sound mixing and other post-production costs.

"People are often surprised by how much making quality film and TV costs," says Dunn. "It requires a lot of hard work from a team of talented people to ensure we make the best possible show. 'Extreme Metal' deserves the same high-production value and attention to detail that we gave the other 'Metal Evolution' episodes. I'm not getting paid to make this episode but what matters to me is that the 'Metal Evolution' series is finally completed!"