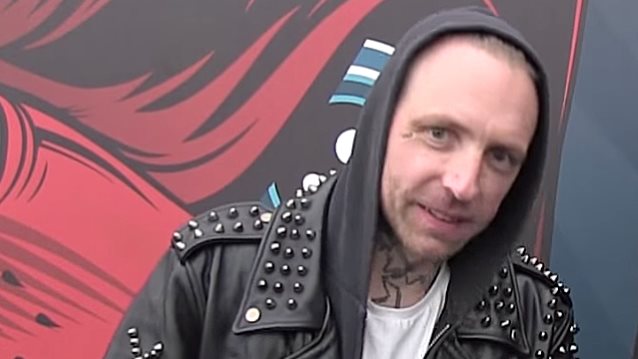 Rock 'N' Load conducted an interview with Nicke Borg of reunited Swedish sleaze rockers BACKYARD BABIES at the 2015 edition of the U.K.'s Download festival, which was held last weekend in Donington Park. You can now watch the chat below.

Speaking about the meaning behind the title of BACKYARD BABIES' forthcoming album, "Four By Four", Borg said: "'Four By Four'. It's, like, BACKYARD BABIES is like a four-wheel truck, you know?! It goes through mud and fucking terrain. And if one wheel, one bandmember, stops working, the three others carry the vehicle."

Nicke also talked about BACKYARD BABIES' new single, "Th1rt3en Or Nothing", which was released last month via Gain Music Entertainment, which is distributed and partly owned by Sony Music. He said: "When we started to play together again and write and talk about this kind of a… well, we don't really wanna call it a comeback… We were looking back at our history and we also tried to understand much more what the fans are obsessed about, what they love about the band, and what we love about the band. So we tried to pack all that stuff into 'Th1rt3en Or Nothing'. It's just a rock and roll tune with a kind of maybe different groovy beat that we had before. There's a lot of cowbell... It's just a rock and roll song, and I'm happy people like it. We were really [trying to figure out], 'What kind of type of song do we want to…?' Because, when you've been away, and the expectations are building up, it felt like whatever we're gonna release, people are gonna get disappointed, because some people want that, and some people want that, and people have different favorite albums throughout the career. But, cross my fingers, a lot of fans seem to team up behind the song, which is really cool."

On the topic of BACKYARD BABIES' plans for the remainder of the year, Nicke said: "We're coming, actually, back to the U.K. to do some press in a couple of weeks. But, after that, we'll just continue to do festivals throughout the whole summer. We're going to Japan to play with SLAYER and bands like that at [the] Loud Park [festival]. We'll continue to rehearse our live set for the autumn and the winter, and we're coming back here to play clubs in November."

"Four By Four" will be released on August 28.