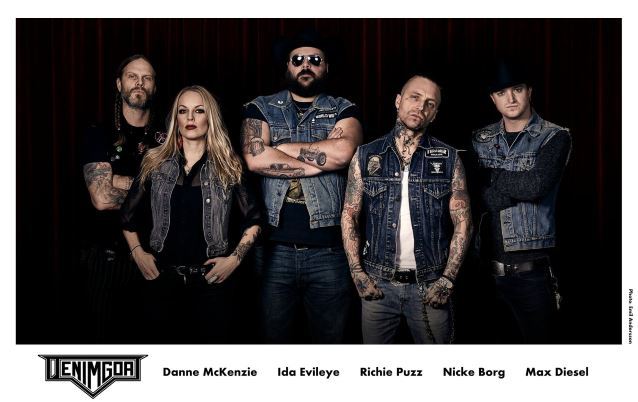 January 4, 2016 marks the 30th anniversary of THIN LIZZY legend Phil Lynott's death. It is also the release date of DENIMGOAT's new single, "Nineteen", a cover version of the track that became Lynott's last single release ever.

Drummer Danne McKenzie has played with bands like MUSTASCH and TRUCKFIGHTERS, Nicke Borg is fronting his solo project NICKE BORG HOMELAND and the recently reunited BACKYARD BABIES, lead singer Richie Puzz is host for the morning show at Sweden’s rock radiostation Bandit Rock, Max Diesel is the frontman in JUNKSTARS and Ida Evileye is the longtime bassist for CRUCIFIED BARBARA.

DENIMGOAT's debut single, "I Need To Know", entered the iTunes Rock Chart at No. 1 in the band's home country of Sweden. The song was recorded with Fred Estby (DISMEMBER, THE DAGGER) at Gutterview Recorders studio in Stockholm and was released on vinyl in November 2014 via Lightning Records.