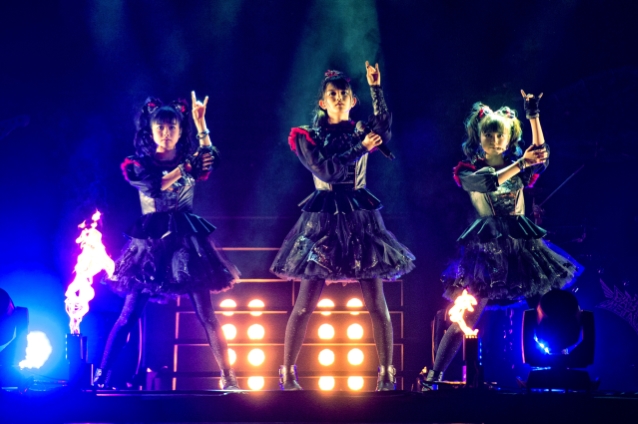 Japanese pop metal act BABYMETAL will release a new digital live video on Friday, August 24. "Legend - S - Baptism XX" includes the band's two-day performance at the Hiroshima Green Arena on December 2 and December 3, 2017. This concert was the first headline show for BABYMETAL to perform in Hiroshima, which is the vocalist Su-Metal's birthplace and a special concert to celebrate Su-Metal's 20th birthday.

This new digital live video contains all 16 songs, including BABYMETAL's new song "In The Name Of".

Earlier this year, spokesperson for BABYMETAL's American management company confirmed Yui Mizuno (a.k.a. Yuimetal) remained a member of the group after she was a no-show at the first two concerts of BABYMETAL's U.S. tour. A 5B Artist Management representative released a statement saying that "there is a new narrative for the future of the band which is currently evolving. The storyline has changed. This was the basis of the 'Metal Resistance Episode 7: The Revelation' video."

The representative went on to explain that the seven hooded figures in the bombastic clip represent a new era for the band, with the addition of new characters. "The who, when, where, and how of The Chosen Seven will be presented as the concept unfolds," the spokesperson said.