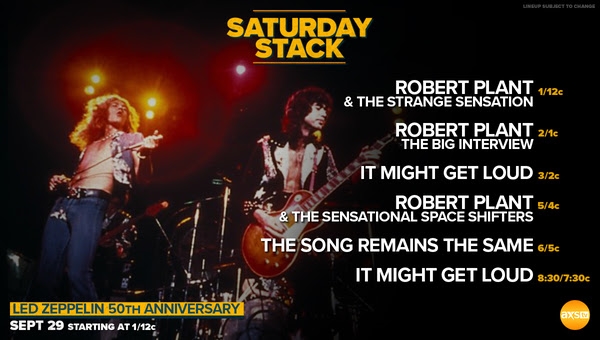 The Tuesday night setlist kicks off on September 4 with the acclaimed 2008 rock doc "It Might Get Loud" featuring guitar virtuoso Jimmy Page discussing the tools of his legendary trade. On September 11, the hard rock pioneers blend music with cinema, creating a unique psychedelic odyssey in the 1976 "Led Zeppelin: The Song Remains The Same". "It Might Get Loud" airs again on September 18, then LED ZEPPELIN frontman Robert Plant reflects on his childhood in post-war Britain, his biggest musical influences, and the powerful lure of music on "The Big Interview With Dan Rather" on September 25.

The month culminates in an epic "Saturday Stack" block on September 29, starting at 1:00 p.m. ET at as Robert Plant takes the Windy City by storm in an intimate evening featuring LED ZEPPELIN favorites, solo staples, and more in "Robert Plant & The Strange Sensation"; followed by Plant's sitdown on "The Big Interview With Dan Rather" at 2:00 p.m. ET; and Jimmy Page in "It Might Get Loud" at 3:00 p.m. ET. Then Plant puts a new spin on beloved classics such as "What Is And What Should Never Be", "Rainbow" and "Little Maggie" in "Robert Plant & The Sensational Space Shifters - Live At David Lynch's Festival Of Disruption" at 5:00 p.m ET. The block comes to a close with "The Song Remains The Same" at 6:00 p.m. ET and 10:30 p.m. ET and "It Might Get Loud" at 8:30 p.m. ET.