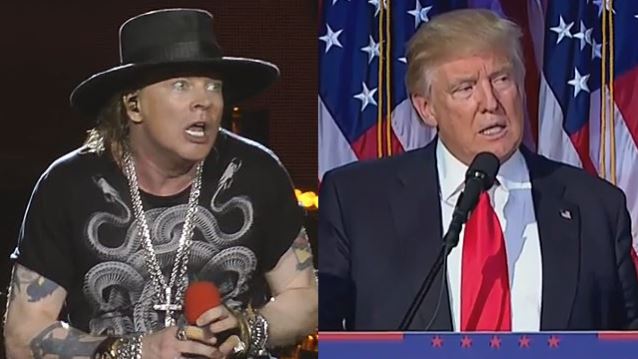 Axl Rose has accused Donald Trump of "whining" after the president-elect demanded an apology from the cast of "Hamilton", the hit Broadway musical, for "harassing" vice president-elect Mike Pence at a performance Friday evening.

"'Hamilton cast harassed Pence,'" the GUNS N' ROSES singer tweeted. "Do you ever stop whining? An apology? Seriously?! You won, this is the job, Get on with it or get out of the kitchen."

Trump sent tweets on Saturday to object to an impassioned curtain speech by actor Brandon Victor Dixon, who called on the new administration to work on behalf of all Americans, including those "alarmed and anxious" that their "inalienable rights" may be infringed.

Dixon, who plays Vice President Aaron Burr in the Tony-winning multicultural musical about the founding fathers, thanked Pence for his attendance and urged the audience to be respectful.

He then delivered this statement on behalf of the show: "We are the diverse America who are alarmed and anxious that your new administration will not protect us," Dixon said. "We truly hope this show has inspired you to uphold our American values and work on behalf of all of us."

Trump continued his Twitter war on "Hamilton" Sunday morning, repeating his demand for an apology for "very rude and insulting" treatment of Pence and adding an opinion about musical, saying he hears it's "highly overrated." The president-elect also sent out a tweet saying that the actors in "Hamilton" can't even "memorize their lines," but he quickly deleted it.

Dixon, however, responded directly to Trump, tweeting, "Conversation is not harassment, sir."

Pence himself indicated on Sunday morning's (November 20) edition of "Fox News Sunday" that he thought "Hamilton" was "incredible," and "wasn't offended" by either the boos or the cast statement. The vice president-elect said he would leave it to others to decide whether the speech to him was appropriate.

"It was the most respectful, benign form of bullying ever. But bullying nonetheless. And by the way, human rights must be won, not asked for," Van Zandt wrote.

"Hamilton made a mistake. Audiences shouldn't have to worry about being blindsided like that. Theater should be sanctuary for Art to speak," he continued.

"Lin-Manuel is a genius. He has created the greatest play since West Side Story. He is also a role model.

"This sets a terrible precedent. Completely inappropriate. Theater should be a safe haven for Art to speak. Not the actors. He needs to apologize to Mike Pence… He was their guest. You protect your guests. Don't embarrass them. When artists perform the venue becomes your home. … It is nothing short of the same bullying tactic we rightly have criticized Trump for in the past. It's taking unfair advantage of someone who thought they were a protected guest in your home."

"A guy comes to a Broadway show for a relaxing night out. Instead he gets a lecture from the stage! Not a level playing field. It's bullying. You don't single out an audience member and embarrass him from the stage. A terrible precedent to set."

Van Zandt, however, made it clear that he did not endorse Pence or Trump's politics.

"Please don't misunderstand," Van Zandt said. "Everyone who is sane disagrees with his policies. This was not the time or place to do it is all I’m saying."

E STREET's Nils Lofgren disagreed with his bandmate, tweeting: "I don't see any [bullying] here. Bravo," He also added of Van Zandt's stance: "It is ok to disagree. The audience had the freedom to boo. The statement was truth to power... Any chance you get to speak truth to power right now, you have to take it."

"Hamilton Cast harassed Pence." Do u ever stop whining?An apology?Seriously?!U won,this is the job,get on with it or get out of the kitchen.

Tonight, VP-Elect Mike Pence attended #HamiltonBway. After the show, @BrandonVDixon delivered the following statement on behalf of the show. pic.twitter.com/Jsg9Q1pMZs

@realDonaldTrump conversation is not harassment sir. And I appreciate @mike_pence for stopping to listen.

The cast and producers of Hamilton, which I hear is highly overrated, should immediately apologize to Mike Pence for their terrible behavior