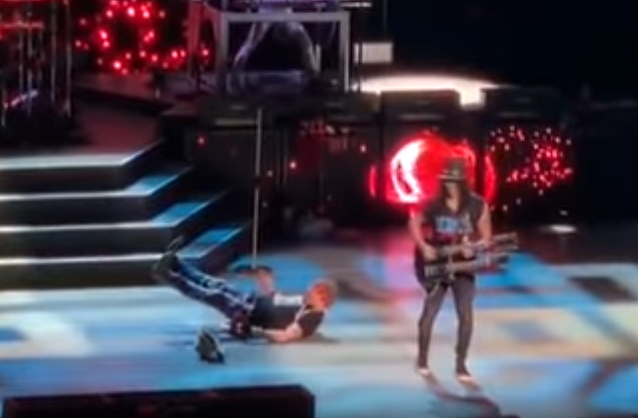 According to TMZ, GUNS N' ROSES frontman Axl Rose took a nasty fall during the band's concert Friday night (November 1) at The Colosseum at Caesars Palace in Las Vegas.

Halfway through performing GUNS N' ROSES' 14-minute version of Bob Dylan's "Knockin' On Heaven's Door" took a few hops backward and slipped on stage and landed on his butt as his hat flew off his head. The 57-year-old singer made a joke of it, asking the audience, "How was that?", before getting right back up and continuing with the show. A short time later, he went off to the side of the stage, got a towel and wiped down the area of the stage where he seemed to lose his balance, suggesting that there was some sort of liquid that triggered the fall.

Video footage of the incident can be seen below (courtesy of TMZ and YouTube users Julio Fernandez and Brenda Tovar).

Rose has since taken to Twitter to thank fans for their concern, claiming he was saved by his choice of footwear.

"Thank you for all the best wishes and, if I hadn't had the boots, the straps n' everything I do for my ankles it would've been worse," he wrote.

GUNS N' ROSES' current trek will close out tonight (Saturday, November 2) with another show at the The Colosseum.

"Not in This Lifetime" launched more than three years ago and is now believed to be the second-highest-grossing tour of all time, having generated more than $500 million since it began in April 2016.


Thank you for all the best wishes and, if I hadn’t had the boots, the straps n’ everything I do for my ankles it would’ve been worse.