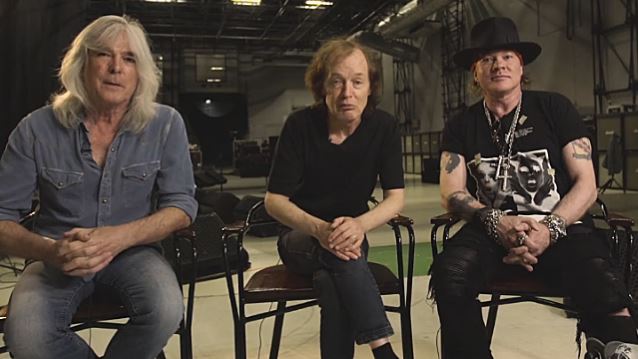 Axl Rose has made his first on-camera appearance with AC/DC in a new video promoting the band's upcoming show in Lisbon, Portugal.

The short clip features Axl, Angus Young and bassist Cliff Williams sitting in their rehearsal studio and inviting Portugese fans to the first rescheduled date of their "Rock Or Bust" world tour.

"Lisbon, here we come," says Young in the video. "We're really excited to be here in Portugal. We're here to give you a great rock show, so we we hope to all see you all there."

"Absolutely," adds Rose. "We are very excited to be there."

"And we'll see you on Saturday," says Williams.

Rose told NME about the prospect of joining AC/DC and what it means to him: "It's a challenge, and I wanna do right by the band and the fans."

As previously reported, approximately 7,000 AC/DC fans who bought tickets to see the band on May 16 at Werchter Festivalpark in Werchter, Belgium have asked for their money back because they don't want to watch Rose on lead vocals.

Promoter Live Nation said that the disappointed fans had until Monday night (May 2) to claim a refund.

The newly released seats were then first made available to those people who were previously on the waiting list for the event, with the remaining 6,000 tickets once again going on sale to the general public.

The park can hold up to 88,000 people although it is not known how many tickets were sold for this show.

The show is one of twelve European dates AC/DC will perform with the GUNS N' ROSES frontman on lead vocals after singer Brian Johnson was ordered to stop touring or risk going deaf.

A similar refund offer has been made available on some of the other dates on AC/DC's European tour, which kicks off on Saturday (May 7) in Lisbon and runs through June 12 in Aarhus, Denmark.

Following that, Rose will head out on his previously announced summer reunion tour with GUNS N' ROSES. AC/DC's ten postponed U.S. dates will take place later in the year, also with Rose as frontman, and the refund policy on those shows has not been revealed.