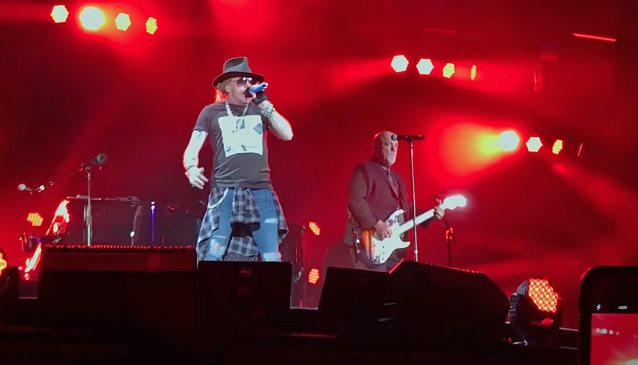 About ninety minutes into the show, Joel announced, "I'm going to bring out a friend of mine … please welcome Axl Rose." And with that, Joel strapped on a guitar and handed the microphone to Rose, who took over on lead vocals for "Highway To Hell". Axl returned during the encore for "Big Shot".

Joel has frequently performed "Highway To Hell" during his concerts in recent years, often recruiting his roadie Chainsaw to sing lead vocals.

Rose did a string of European and North American concerts with AC/DC in 2016, mostly to fan and critical acclaim.

It is unknown whether Rose will continue singing with AC/DC. The band's future remains in doubt after the band completed its world tour in support of 2014's "Rock Or Bust", a cycle that saw a massive turnover in the group's personnel. Guitarist and sole original member Angus Young has not yet indicated whether the group will continue recording and touring.