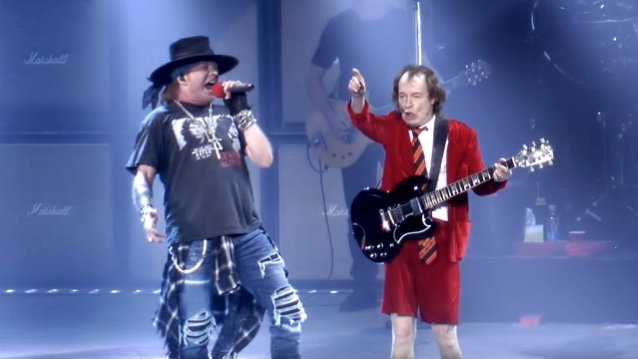 Duff McKagan says that Axl Rose did a "great" job performing with AC/DC.

McKagan, who is one-third of the reunited partial classic lineup of GUNS N' ROSES, got a chance to watch Rose and AC/DC play in June 2016 in London, England and in September 2016 in Cleveland, Ohio.

Duff spoke about Axl's collaboration with AC/DC during a recent appearance on "The Church Of What's Happening Now" podcast. He said (see video below): "The way [Axl] did that was amazing. He was, like, 'If you guys don't mind, I'm gonna go try out. They need a hand here.' [Late AC/DC frontman] Bon Scott's his all-time [hero]. [We said], 'Dude, you know you don't really have to try out for AC/DC.' But he was really nervous. 'I'm gonna go try out. It fits in with our touring perfect.' And Slash and I were, like, 'You've got the gig.' But he went to Atlanta and tried out, quote-unquote, and got the gig. I saw him twice on that tour. I flew to London to see him, and I flew to Cleveland to see that. It was great."

McKagan added: "I think what it did for [Axl]… We got to know Angus [Young, AC/DC guitarist] through that. Angus has now come out and played with us a bunch of times. That was that thing when he was 14 or 15, 'Man, one day, if I ever got to be in AC/DC…' He was singing with a broom, and he finally got to do it. Amazing."