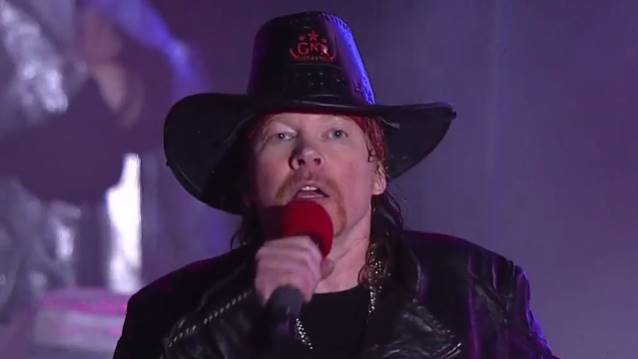 GUNS N' ROSES lead singer Axl Rose has dimissed as "bullshit" a report posted at RadarOnline.com which claimed that the band was about to break up. The article in question quoted "a source close to the band" as saying that Rose will call it a day after the group finishes up its Las Vegas residency at the Hard Rock Hotel, which began on May 21 and ends on June 7. The source explained, "Band members have been told their calendars are free following Vegas. Axl is considering retiring and it's done. Band members and support staff were surprised when told the news and are actively looking for work."

Several hours after the RadarOnline.com story appeared online, GUNS N' ROSES responded by posting a photo of Axl with the message "I'm Not Going Anywhere" and the caption: "GNR fans sure have a Radar for BS! Love you all!"

Sources have told The Pulse Of Radio that Axl has previously indicated to members of the current GUNS N' ROSES lineup his desire to stop touring, only to change his mind and book dates.

Keyboardist Dizzy Reed, a 20-year veteran of the group, told The Pulse Of Radio that unpredictability has always been part of the band. "The volatility is definitely still there, especially for me, because I've seen a lot," he said. "It keeps you on your toes for sure. I just show up every night as prepared as possible to do my job, and anything else that happens is out of my control. There's really no way to truly deal with that."

Rose is the only remaining member of the original band that first launched in 1985, with lead guitarist Slash, bassist Duff McKagan, drummer Steven Adler and rhythm guitarist Izzy Stradlin having all left over the years.

The band has only released one album of all-new studio material in the past 23 years, 2008's "Chinese Democracy". The disc took 13 years to make and was only a modest seller, moving just around half a million copies.