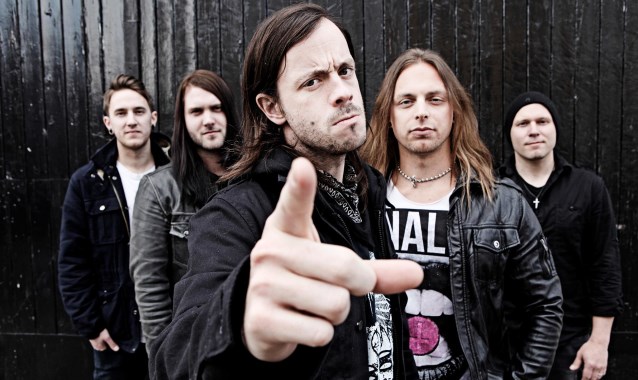 AXEWOUND, the project featuring Matt Tuck (BULLET FOR MY VALENTINE) on guitar and vocals, Liam Cormier (CANCER BATS) on lead vocals, Mike Kingswood (GLAMOUR OF THE KILL) on guitar, Joe Copcutt (RISE TO REMAIN) on bass, and Jason Bowld (PITCHSHIFTER, KILLING JOKE) on drums, has commenced work on material for its sophomore album. Tuck tweeted earlier today (Monday, August 19): "Can't wait to get back in studio with the ladz."

AXEWOUND was forced to cancel its North American tour at the end of 2012 because the bandmembers were "unable to obtain the proper visas" in time for the trek.

The group's debut album, "Vultures", was released in the U.S. last October via The End.

AXEWOUND is an outlet for the musicians to make music that is more extreme than they can and do in their regular bands. Their inspirations for doing so hark back to a golden generation of metal acts — to such heavyweight names as PANTERA and SLIPKNOT.

The roots of AXEWOUND go back to 2010, when Jason Bowld filled in for BULLET FOR MY VALENTINE drummer Michael "Moose" Thomas on a brace of shows. He and Tuck kept in touch and last year began discussing working together on a project separate from the hugely successful Welsh metallers. They eventually got together in December 2011 to write the songs that make up AXEWOUND's debut album, "Vultures".

Cormier was the obvious choice to front and pen lyrics for these songs. He and Tuck had been friends for years, CANCER BATS having supported BULLET FOR MY VALENTINE on numerous tours.