Belgium's AXAMENTA, the former band of current EPICA bassist Yves Huts, has called its quits. The group writes on its web site: "This would be a perfect opportunity to attempt an eloquent effort, which could sound something along the lines of: 'In the bleak wintersun of 2009 the shroud falls over the vague and dark contours of what once was AXAMENTA.' But, as above pompous jabbering usually makes us cringe, let us stick to the cold scientific facts: AXAMENTA - 1 SINGER - BLACK METAL = NEW BAND + 2 NEW BANDMEMBERS + INTERESTING NEW STYLE + BOOZE + POWERTOOLS. If BLACK METAL = NO BLING, Then AXAMENTA = NEW BAND + BLING. NEW BAND = SOLID GOLDEN RIMS FOR OUR HUMMERZ => AXAMENTA = RIP.

"Information, bandname, logo, lineup, teaser and website for the new band are due mid-February."

AXAMENTA's final album, "Ever-Arch-I-Tech-Ture", was issued in Europe in May 2006 via Shiver Records. The CD was recorded at Hansen studio in Ribe, Denmark with producer Jacob Hansen (MERCENARY, RAUNCHY, ABORTED) and was mixed and mastered will at Studio Fredman in Gothenburg, Sweden under the supervision of producer Fredrik Nordström (IN FLAMES, SOILWORK, DIMMU BORGIR, THE HAUNTED, OLD MAN'S CHILD). PAIN OF SALVATION singer Daniel Gildenlöw is featured as a guest vocalist on one entire song ("Threnody for an Endling"), for which he wrote the melody and vocal pattern himself. 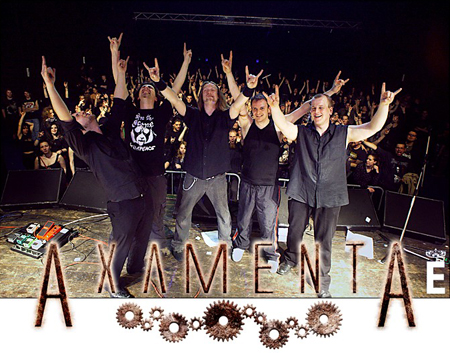