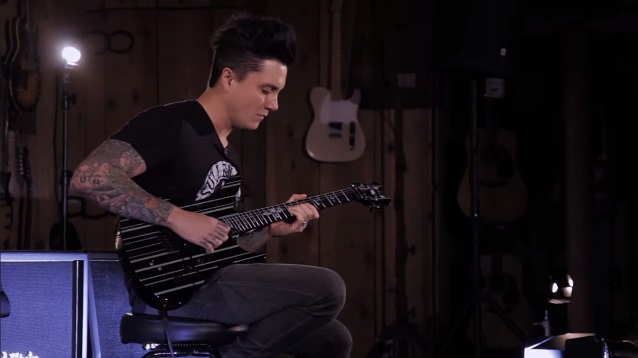 Meltdown of Detroit, Michigan's WRIF 101.1 FM radio station recently conducted an interview with AVENGED SEVENFOLD guitarist Synyster Gates. You can now listen to the chat using the audio player below.

Asked how he felt about Zakk Wylde's (BLACK LABEL SOCIETY, OZZY OSBOURNE) recent comment that Gates is "the torchbearer for the young kids now to play solos, learn the scales, and develop a feel," Synyster said: "It's an unbelievable honor. It doesn't get any better than a player like that. He's just a really cool guy. And I'm fucking honored."

Gates also came up with a list of his favorite guitarists, telling WRIF: "If I had to pick five, Zakk would definitely be on that list. Dimebag Darrell [PANTERA] definitely [be near] the top. Slash [GUNS N' ROSES], John Petrucci [DREAM THEATER]. I listen to a lot of fusion guys too — Allan Holdsworth and Frank Gambale. All amazing musicians."

Asked if any of those influences ever come out in AVENGED SEVENFOLD's music, Synyster said: "It all comes out. We listen to a lot of classical and a lot of jazz, and so you get some funky notes here and there. And we get a little experimental in some of the deeper tracks.

"We have a lot of fun. There are no holds barred when it comes to writing music for us.

"We're not gonna write a fusion song for AVENGED SEVENFOLD, obviously, but I love having those elements and blending it in, and having the eclectic arrangements nand stuff like that. It's a lot of fun."

AVENGED SEVENFOLD has issued a music video for "This Means War", the latest single from the band's 2013 album "Hail To The King". The clip has been described as a "grisly street fight on the dark streets of an urban metropolis. Haunted by dark creatures and lost souls." As for the song itself, AVENGED singer M. Shadows has admitted in interviews that it bears a strong resemblance to METALLICA's "Sad But True".

"Hail To The King" was the band's second straight CD to debut at No. 1 on the Billboard chart, following 2010's "Nightmare".