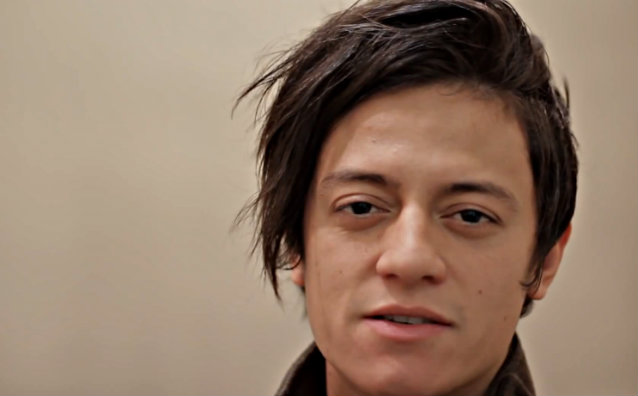 AVENGED SEVENFOLD's Arin Ilejay recently spoke to U.K.'s Rhythm magazine about the drummers who have shaped his style, including METALLICA's Lars Ulrich.

"In so many ways, Lars really is the best metal drummer," Arin said. "He doesn't have the crazy shredding chops that a lot of drummers have, but he has the best stage presence of any drummer. He's out of his mind, but writes incredible parts for the music. He's the Ringo Starr of metal.

"Ringo and Lars get the least amount of credit, but they are absolute geniuses.

"I used to think drummers had to shred to get anywhere, but when you look at the music industry, it is saturated with incredible musicians and that doesn't mean that your band is going to make it. It's not enough to just shred.

"On 'Hail To The King' [the latest AVENGED SEVENFOLD album], along with all of our fans, I thought I was going to be writing the craziest drum parts for that record, something to fill the shoes of The Rev [late AVENGED SEVENFOLD drummer [Jimmy Sullivan]. But the band wanted me to create my own sound and legacy. They wanted me to dumb it down and play caveman-like and spaced out, with big fills that support the music. I was bummed out about that at first, but it helped to have heard drummers like Lars. For the next album, we have kicked around the idea of having some crazy fills."

In a 2012 interview with DRUM! magazine, Ulrich stated about his playing ability: "I usually feel like I've regressed. [laughs] I'm like, 'Why can't I do that anymore?'"

He added: "I can't say that I necessarily sit down to practice, like, 'I'm going to play and practice so I can get better.' What happens is that I just sit down and kind of play to just more stay in shape.

"You know, METALLICA was up to two or three months off [in 2011], and I would sit down, I have an iPod next to my drums so I can play along to all kind of crazy stuff, and try to see if I can land in the same zip code of some of that stuff occasionally. But I can't say that I sit down to necessarily practice to sort of get better. For most of my stuff, it's about listening and about interpreting stuff that I'm listening to. So all the kind of sitting down and, you know, 'Now I'm going to do thirty-second-note paradiddles standing on my head — you know what I mean? I don't do that kind of stuff so much. For me it's more about the regimen of staying in shape, running every day, eating healthy, you know, being on top of that side of it."