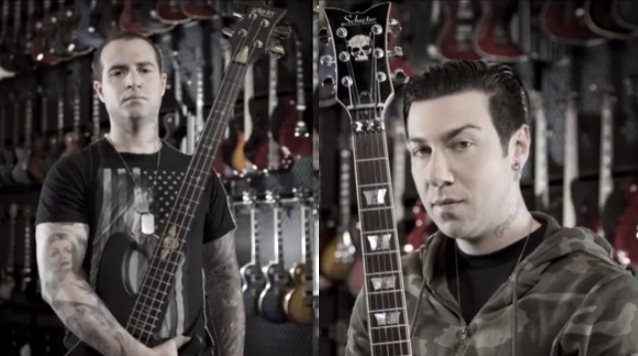 Video footage of the techs for Zacky Vengeance and Johnny Christ of AVENGED SEVENFOLD going over their live rigs for Schecter Guitar TV can be seen below.

AVENGED SEVENFOLD's new album, "Hail To The King", sold 159,000 copies in the United States its first week of release. The disc beat out strong new entries from rappers Big Sean and Juicy J to hold on to the top spot and give the California band their second straight chart-topper after 2010's "Nightmare", which moved 163,000 copies to hit the top spot upon its arrival.

The title track from "Hail To The King" has spent four straight weeks at the top of Billboard's Active Rock radio airplay chart.

AVENGED SEVENFOLD's opening is also the largest week for a hard rock album in over a year. The last to sell more in a week was LINKIN PARK's "Living Things", which debuted at No. 1 with 223,000 copies sold in July 2012.

The tour will conclude on October 26 in Las Vegas. Support on the road trip will come from DEFTONES and GHOST.

AVENGED SEVENFOLD celebrated the release of the new album last week with a free show at the Hollywood Palladium in Los Angeles.