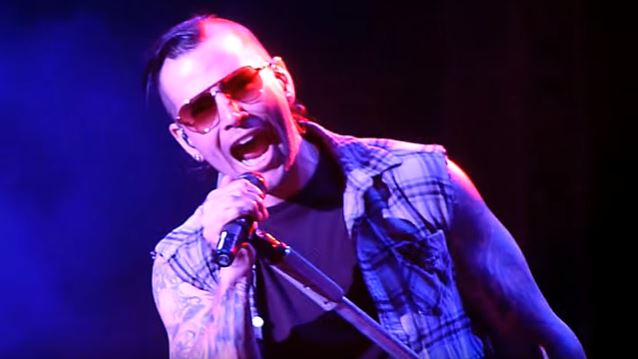 According to The Pulse Of Radio, AVENGED SEVENFOLD singer M. Shadows told the "Loudwire Nights" radio show in a new interview that the band's ongoing legal battle with its label, Warner Bros. Records, over its announcement in late 2015 that it was leaving the label, has not been settled yet. Shadows explained: "There hasn't been a resolution with that… We left because every single person at the label… not every single person; the radio department is still intact. But the people that signed us, the A&R people, all the people that had to do with the high up at the company didn't know who AVENGED SEVENFOLD was or cared at this point. So we had to leave."

Warner Bros. sued the band in early 2016 for breach of contract, claiming that the group owes the company one more studio effort and a live CD/DVD.

The dispute with the label may have also played a role in the abandonment of the band's long-delayed live DVD, "This Is Bat Country". Shadows said: "The reality is the DVD just never got there… The DVD was never quite good enough to come out, in our opinion. So I don’t know what’s happening with it right now. I know it's still on the cutting floor. We're still trying to make tweaks to it, but then there's also the Warner Bros. thing. We're not with Warner Bros. anymore and they own the rights to that footage."

Shadows told The Pulse Of Radio that AVENGED SEVENFOLD never wants to release anything to its fans that it doesn't deem top-notch in quality. "I really want to do better in terms of quality output," he said. "I don't want to have any little areas where you're just like, 'Eh.' When people don't like a record, I want to come back with the next one and just smash 'em with something amazing. Everyone's not gonna love everything but I think for us, I really want to keep the high quality output."

AVENGED SEVENFOLD opened for METALLICA in Minneapolis last month and has a string of headlining and festival dates on tap for this fall.

The band has been working on its seventh studio album, its first with new drummer Brooks Wackerman. But the group has not set a release date for the disc and has not indicated how far along it is in recording.