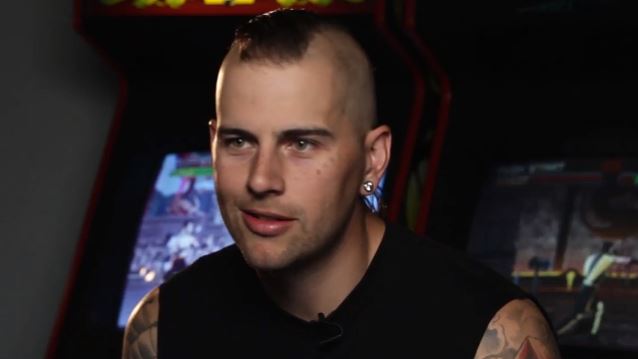 AVENGED SEVENFOLD has finally released its long-in-development mobile role-playing game, "Hail To The King: Deathbat". The game is available on the App Store and Google Play for $4.99.

Video footage of AVENGED SEVENFOLD singer M. Shadows and developer Michael Stragey talking about the development of "Hail To The King: Deathbat" can be seen below.

M. Shadows said in a statement: "The process of developing this game has been a new and challenging experience for us as we've worked hard to create a game that we are not only proud of but more importantly, a game that is fun to play. We think we've achieved that and hope you enjoy the game."

Shadows told The Pulse Of Radio that the fan response to the game after just one day has been the most gratifying part for him. "Putting this thing out was very scary in a way because it's, you know, a lot of people would want to say, 'Hey, you're a band, don't give me a game, I don't want it,' he said. "And from the reaction today that we're getting from when it's out and just seeing Twitter explode and seeing people playing it online and being excited about it and getting to walk around in our world that we created for them, it's been amazing and just puts a smile on my face. I'm super, super happy with them."

"Hail to the King: Deathbat" features classic AVENGED SEVENFOLD tracks along with a new and original score composed by the band.

AVENGED SEVENFOLD also has a DVD in the works and will tour Southeast Asia in early 2015.

In August the group reissued its 2003 second album, "Waking The Fallen", in a special edition featuring previously unheard music and demos, new artwork and a documentary on the making of the record.

AVENGED SEVENFOLD was touring in support of its sixth album, "Hail To The King", which debuted at No. 1 in August 2013 on the Billboard chart.