AVENGED SEVENFOLD is continuing to expand its latest album, "The Stage", into an evolving body of work by adding a series of new tracks over the course of several months. Today sees the release of the album's latest addition, their rendition of "Runaway", the 1961 song made famous by Del Shannon. The track, which features a guest appearance by THE VANDALS guitarist/vocalist Warren Fitzgerald, follows the recent release of AVENGED SEVENFOLD's version of MR. BUNGLE's "Retrovertigo", and the band's first-ever Spanish-language recording, "Malagueña Salerosa", a song whose companion video has already amassed over three million YouTube views. The band recorded all three tracks with producer Joe Barresi (QUEENS OF THE STONE AGE, TOOL).

"When we decided to expand the album and add new tracks, everyone in the band chose a song that would be interesting to cover," says AVENGED SEVENFOLD vocalist M. Shadows. "Zacky came up with the idea of doing a punk rock version of the Del Shannon classic. While in the studio, Synyster brought up our old friend Warren Fitzgerald, saying it'd be great to have him play on the track and give the song the kind of reckless abandon he's known for with THE VANDALS. With Warren on board, Zacky wanted to have a crack at singing, which really put the song over the top. I do a little talking thing with him in the middle of the track, but that's it. The rest is all him and it came out great."

"I've always loved 'Runaway' and the dark undertone hidden behind the upbeat doo wop track," says Zacky. "You can hear sincere anguish in his voice. I raised my hand to add a little punk rock flair to the vocals, have some fun, and give the fans a little something to talk about."

Adds Fitzgerald: "I've known the AVENGED SEVENFOLD guys for years and obviously Brooks [Wackerman, AVENGED SEVENFOLD drummer] played with THE VANDALS, and our bands are both from Huntington Beach, so the ties run deep. But I was still surprised and honored that they asked me to play on the track. I think it's a really cool choice for a cover and the guys were very generous in the studio. They're all incredible musicians and to have them say, 'do what you do,' was really flattering. So I did, and we had a blast, and I'm tickled to death with how it all turned out."

The official video for AVENGED SEVENFOLD's cover of "Runaway" was directed by Rafa Alcantara and produced by TWENTYFOURCORE. Check it out below.

"We love the idea of putting out music in a non-conventional way," M. Shadows told Billboard. "We also love making albums, so this allowed us to do both. This was all put into motion when we made the original recording for 'The Stage', so it all feels cohesive; We put out 'The Stage' and let it sink in for seven months, and now we can add to that piece of work. This way, throughout the cycle you'll be able to hear new music while going back to the original album.

"The idea of turning an album into a living piece of art and adding new installations is really intriguing," he continued. "It expands the journey."

Shadows added that AVENGED SEVENFOLD took inspiration from the way hip-hop and pop artists have taken to surprise and random releases of new material, sometimes with little or no notice, and sometimes simply releasing individual songs not related to any particular album or other project.

"We told all the kids we were going to evolve the record... It was just a matter of how," Shadows said. "Obviously it works in the (pop) mainstream a little better than it does in rock 'n' roll. You look at what Kendrick Lamar or Drake are doing, or any hip-hop or pop act. Their streaming numbers are through the roof. And you look at rock, and they're just not there. But we want to get new stuff out to people. We don't have the answers to all the big questions in the music industry, but we do have control of keeping ourselves artistically satisfied, and this just seemed fun to us."

M. Shadows recently confirmed to Kaytie of the Razor 94.7 radio station that AVENGED SEVENFOLD will embark on a full North American headlining tour in January and February 2018. The trek, which will be announced after the completion of AVENGED's current stadium run as the support act for METALLICA, was originally "supposed to happen this summer until we got that call from METALLICA, so we decided to put it on hold," the singer explained. 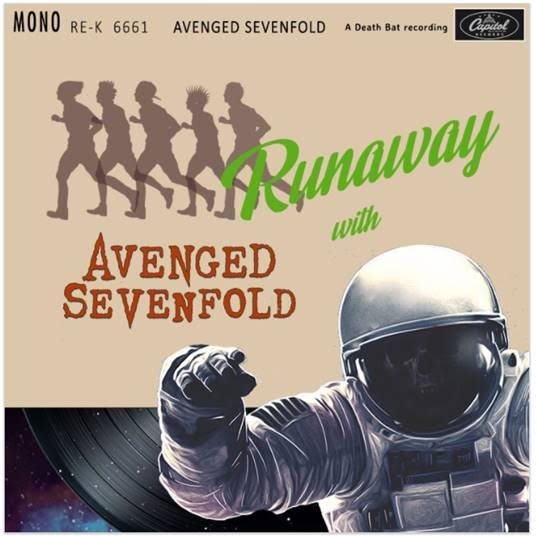