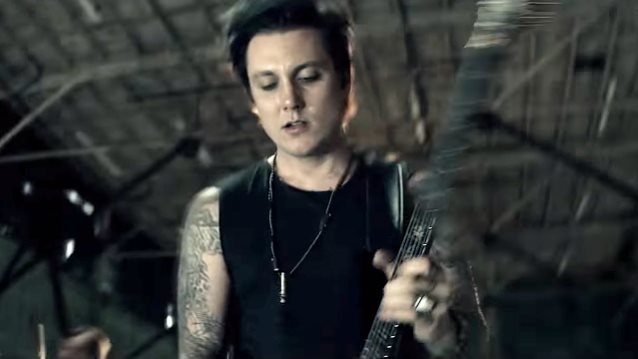 AVENGED SEVENFOLD guitarist Synyster Gates spoke to Cincinnati.com about having to miss a show on the band's stadium tour with METALLICA due to the birth of his first child, Nicolangelo "Nicci" Saint James.

Nicci arrived two weeks earlier than expected, forcing the group to scrap one of the shows on the "WorldWired" trek, which kicked off in early May.

"We blocked out ten days before and after, so twenty days total, around his due date, thinking that that's enough time unless something crazy happens," the guitarist said. "And of course, something crazy happened. I had to cancel a show in Philly. Life is just a bunch of madness, but it's extremely exciting, and we're definitely having a good time."

Even though his son is only two months old, Gates told Cincinnati.com that he fully expects Nicci to follow in his rock and roll footsteps.

"He's going to be introduced to it all," Synyster said. "We play him music all the time. He's got the buzz already. When I pick up the guitar or play piano or whatever. he focuses in. His attention span is pretty good when you're playing music or stimulating the guy like that. I know I'm biased. But it seems pretty obvious to me. He's already been on the road. He came out a few weeks ago when we were in Houston. He's already a road veteran."

AVENGED SEVENFOLD frontman M. Shadows recently confirmed to the Razor 94.7 radio station that the band will embark on a full North American headlining tour in January and February 2018. The trek, which will be announced after the completion of AVENGED's current stadium run as the support act for METALLICA, was originally "supposed to happen this summer until we got that call from METALLICA, so we decided to put it on hold," the singer explained.