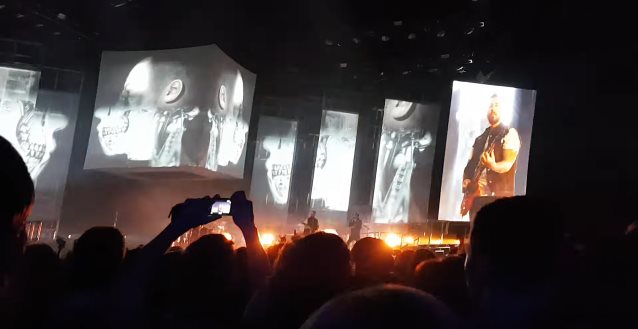 AVENGED SEVENFOLD debuted its new stage production last night (Saturday, January 7) in Dublin, Ireland at the opening concert of the band's European tour with DISTURBED and IN FLAMES. Check out fan-filmed video footage of the performance below.

AVENGED SEVENFOLD worked with the producers of Cirque Du Soleil on the current show. Singer M. Shadows told Metal Hammer last month: "The production that's being built is different for us, different for anyone I've ever seen, the people we've hired don't do tours, they do Cirque Du Soleil." Shadows added that the production may require a different schedule, explaining: "This is gonna be drawn out into different types of touring. We're not going on tour for six months, it'll be two weeks on, two weeks off."

Shadows told The Pulse Of Radio that hiring Cirque Du Soleil is part of AVENGED SEVENFOLD's quest to create an entirely new kind of live show. "What we want to do is bring a new element to our stage production," he said. "We don't want to do all the same things that we've been doing. We're looking at a lot of digital image mapping, we're looking at inflatables, we're looking at a show that will be a brand new experience, definitely for rock and metal."

Cirque Du Soleil is currently the world's biggest theatrical producer, bringing its unique modern take on the circus concept to more than 90 million people in 271 cities around the world. This will mark the first time that the company collaborates with a touring rock band.

AVENGED SEVENFOLD is touring behind its seventh studio album, "The Stage", which debuted at No. 4 on the Billboard 200 album chart in November.

The group made the album available at midnight on October 27 with almost no promotion beforehand, save for the arrival of a new song one week earlier. The quintet unveiled the disc with a live-streamed performance from the rooftop of Capitol Records in Hollywood, California.

The company's productions are marked by their theatrical, character-driven approach and the absence of performing animals.

Each show is a synthesis of circus styles from around the world, with its own central theme and storyline.