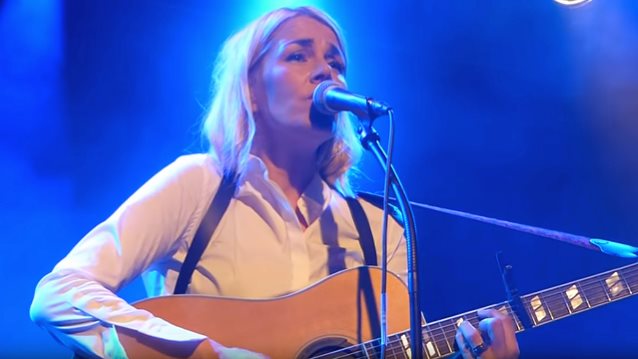 Fan-filmed video footage of AVATARIUM's May 7 performance at the Stockholm Rocks festival at Debaser Medis in Stockholm, Sweden can be seen below.

AVATARIUM's latest album, "The Girl With The Raven Mask", came out in October 2015 via Nuclear Blast. The CD was released in North America as part of a joint licensing venture between Nuclear Blast and Metalville.

Asked if it was clear from the start that AVATARIUM would be more than a one-off project, guitarist Marcus Jidell told Darkview: "When we started to work on the [first] AVATARIUM album, I think we all felt that we had something special going on. To find a band where everything just works musically from the start is very rare, I would say. The first rehearsal was filled with great vibes as well as the album recording and the first show.

"I have been playing in a few bands by now and I never experienced such a strong unit as AVATARIUM. We also had the great opportunity to work with a serious record label and a booking agency that helped us reach out to people with our music.

"When you find a band with this great potential, you have to get out on the road and play your music. Also it is the best way to make a band tight and get better musically and artistically.

"For us, it's very important to never stand still, but to keep on getting better at everything we do, so that's why live shows are very important.

"At the end of the day, there's nothing better in the world than to play a show with an energetic audience and to feel the power of a real rock band."

Regarding the recording process for "The Girl With The Raven Mask", Marcus said: "We really wanted to capture the sound we have when we play live, and since I'm the only guitar player, there's way much more distorted organ live, so we used that in the studio as well. Carl [Westholm] brought in his big Leslie and turned the volume on loud. It also doesn't hurt that we also get a little closer to the DEEP PURPLE and URIAH HEEP sound here.

"As the producer of the album, my main goal was to bring out everybody's personal touch in the songs, and I really think that you can hear each member in the band shine here.

"We recorded the basic foundations live to get the rough live feel, and I didn't let our studio engineer move or repair anything.

"I think people were a little frustrated in the start of the rehearsals and recordings, but now it seems like everybody are very happy with the result.

"When we were done with the recordings, I told David Castillo, who mixed the album, that he had free hands to put his mark on the mix as long as he kept the feel. It was all very well prepared and recorded so he just had to polish it and give the songs the final touch, and he really did an amazing work with the mix, I must say."

Due to his health condition, Edling is unable to perform with AVATARIUM at the band's gigs.