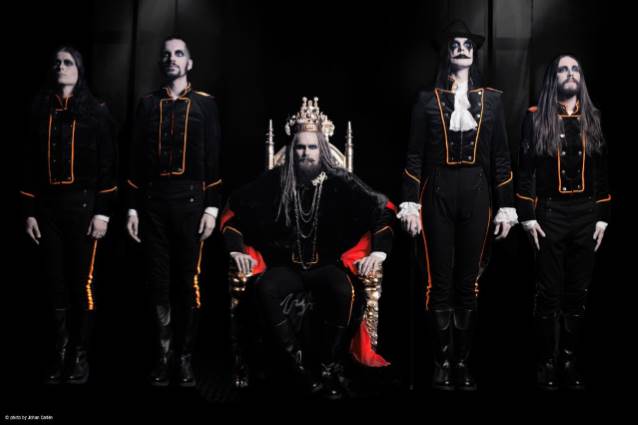 AVATAR's video for the song "The King Welcomes You To Avatar Country" can be seen below. The clip was directed by the Swedish band's longtime collaborator Johan Carlén.

"The King Welcomes You To Avatar Country" is taken from AVATAR's latest album, "Avatar Country", which was released on January 12 via Entertainment One in North America and Century Media Records in the rest of the world. The disc was produced by Jay Ruston (STONE SOUR, ANTHRAX, STEEL PANTHER) last summer at Spinroad Recording Studios in Gothenburg, Sweden.

AVATAR vocalist Johannes Eckerström told Full Metal Jackie's nationally syndicated radio show about the more positive lyrical approach of "Avatar Country" compared to 2016's "Feathers & Flesh": "In one way, I think it's a very natural thing for any band to do. Once you did A, you want to do B, once you paint something blue, the next painting you want it to be red because you're done with blue for a while. I think that is part of, if not all bands, many band's journey, go forward, whatever you end up doing, you don't want to do what you just did. But in this case, also, because 'Feathers & Flesh', it was a story about failure, fear, loss, death. It was very dark and very sad, really. Sadness was a big part of it and it was a piece of fiction. So, this is a reaction against all that. Instead, we decided to speak the truth and open the borders to Avatar Country; tell people the truth of the nature of our king and since the album is a celebration of our king, it naturally becomes, as you said, about hope, strength, life, really. It's a heavy metal celebration this time around, at least compared to what we done in the past. It has some heavy messages anyway. In the name of the king, let's celebrate."

Asked why every songtitle on "Avatar Country" has the word "king" and whether the word is significant to the overall concept of the album, Johannes said: "I think it speaks for itself: That we are celebrating our mighty king of Avatar Country, who is a glorious king indeed, so glorious that he has seven solos in the first song. There are so many aspects to this king and there are so many different ways of telling his story and so many aspects of him, that you do need a full album. So, that is why yes, you're right, we have 'Glory To Our King', 'Legend Of The King', 'King After King', 'King's Harvest', 'The King Speaks', or my personal favorite title, 'Silent Songs Of The King Part 1 - Winter Comes When The King Dreams Of Snow', because there's so much to him."

Avatar will embark on a stretch of European dates this summer including some notable festivals along the way.