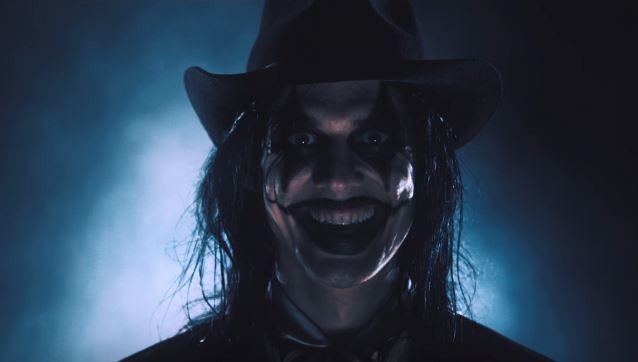 Swedish metallers AVATAR have unleashed another visually stunning music video, with longtime director Johan Carlén at the helm, for their next single, "Night Never Ending". The song is taken from the band's latest concept album titled "Feathers & Flesh", which was released onMay 13 via Another Century in Europe and Entertainment One (eOne) in North America and Canada.

"It's is a special song, being probably the most upbeat and, dare I say, happy piece we've ever released," says AVATAR frontman Johannes Eckerström. "But under the surface of the fragile message of hope and fighting spirit it is little more than a prelude to a tragedy and that is what we set out to capture when we decided to make a video for it."

He continued: "It is very close to my heart for being the one video where there is no 'rocking out' going on and we get to capture a side of AVATAR that is just as integral as the good, headbanging times we love sharing with our supporters all around the world. There are few things in this world as beautiful and fascinating as contrasts and this is what all of 'Feathers & Flesh' is all about. Hope and tragedy."

Eckerström told AXS that the idea of creating a concept album came first and then the journey to find the proper concept became the first leg of that process.

"There was a period of figuring out what would be our story to tell," he said. "I first started with, you know, I'm a clown, and it's horror, and it could be a haunted theme park, and then I fell asleep from my own thoughts because it felt so cliché, boring, lame, stupid. So I moved on and then it was a Swedish novel series, 'The Emigrants' series, and I thought there's some stuff in here that could be turned into something, then I realized that Björn and Benny from ABBA did a musical about it in the '90s, so that one was taken. [Laughs] So I reached the conclusion it needed to be something where we had the same ambition as we do with the music — to do something fresh and original. So I started to soul search for an original story and that led me to researching the concept of fables."