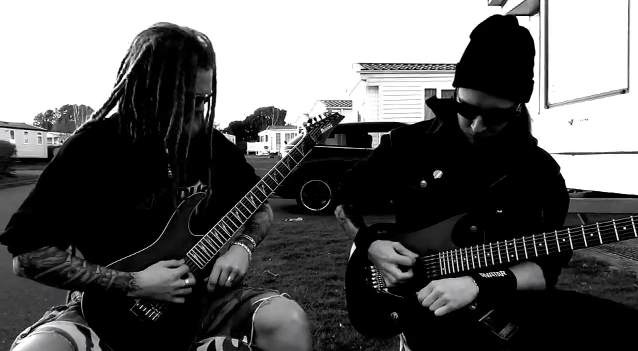 In the five-minute clip below, Jonas "Kungen" Jarlsby and Tim Öhrström of Swedish metallers AVATAR show you how to play the title track of their new album, "Hail The Apocalypse", on guitar.

AVATAR will release "Hail The Apocalypse" on May 16 via Gain Music in Europe and May 13 through eOne in USA. The CD was recorded in Karma Sound Studios, Bang Saray, Thailand, mixed by Jay Ruston (STONE SOUR, ANTHRAX, STEEL PANTHER) and mastered by Paul Logus (VOLBEAT, CLUTCH, KILLSWITCH ENGAGE).

AVATAR is described by many as a perfect mix between RAMMSTEIN, ALICE COOPER and SYSTEM OF A DOWN — something the band has now developed further with the video for "Hail The Apocalypse".

The song "Bloody Angel" can now be streamed using the SoundCloud widget below.

"'Bloody Angel' is about shame and guilt," says AVATAR frontman Johannes Eckerström. "You look around and watch all the suffering and while you search for someone or something to blame, you end up in front of a mirror. Everything you touch, you break. Everyone you try to save you hurt and push further away."

Eckerström comments on the "Hail The Apocalypse" video, which can be seen below: "This is our best video to date. I play your friendly neighborhood doomsday prophet. You get to follow me facing the unbelievers and their reactions when chaos ensues. Good times all around and we are using some really amazing special effects to blow up the planet. Oh, and it's done like a silent movie."

The visually stimulating "Hail The Apocalypse" album cover has also been reveled. It vividly depicts the band steering their ship through a storm on the open sea with the apocalypse happening all around them. They're facing it, riding the waves and taking on whatever comes their way. To the band, it symbolizes the time in the darkness that made these songs.

AVATAR gained much attention when it comes to its creativity in videos, which are always produced by the bandmembers themselves.

Since the release of the band's last CD, "Black Waltz", AVATAR has had massive success all over the world. The singles "Smells Like A Freakshow" and "Let It Burn" peaked on No. 26 on U.S. commercial rock radio charts, where they also stayed for several weeks well ahead of more established bands in the scene. This was followed by extensive and successful U.S. tours.

The biggest break through came when AVENGED SEVENFOLD personally picked AVATAR as support band on their sold-out arena tour in Europe late 2013. AVATAR got a reception far beyond expected by the crowds, which resulted in bookings on high profiled festivals such as Download festival and Rock On The Range in 2014, among own headline dates.