A special BLABBERMOUTH.NET presale will begin on Wednesday, June 9 at 12:00 p.m. (noon) EDT and end on Thursday, June 10 at 10:00 p.m. local time. When prompted, type in the presale code "GOINGHUNTING" to access tickets before the general public. General on-sale will be this Friday, June 11 at 10 a.m. local.

About touring again, AVATAR says: "We have announced many tours over the years, and every time we say that we couldn't be more excited. Well, this is the tour that was supposed to be announced a year and a half ago. A year and a half which has felt more like a lifetime. Saying we couldn't be more excited is an understatement. Never before have we ever been this hungry and passionate to create a show for you and for ourselves. We are not leaving anything behind. This show will be the most beautiful, angry, entertaining and honest production we have ever done. We are sparing nothing. We live and die for this. We are Going Hunting!"

* not a Live Nation date

AVATAR's current album, "Hunter Gatherer", out now via Century Media, marked the darkest and most thought-provoking release of the band's over-decade-long career. A striking and bold manifesto, the album is an unflinchingly ruthless study of a clueless humankind’s ever-increasing velocity into an uncertain future, furthering the reach of the band's always-expanding dark roots. In 2019, AVATAR reunited with producer Jay Ruston (STONE SOUR, ANTHRAX) at Sphere Studios in Los Angeles, California, where the foundation for each song on "Hunter Gatherer" was laid with the band performing altogether, as they'd done only once before, on "Hail The Apocalypse" (2014). The old-school method of playing as one in the studio, more akin to how they are on stage, captured the essence of AVATAR. Recorded entirely to two-inch tape, "Hunter Gatherer" exhibits everything that makes AVATAR standouts in the vast, rich landscape of heavy metal's past and present. 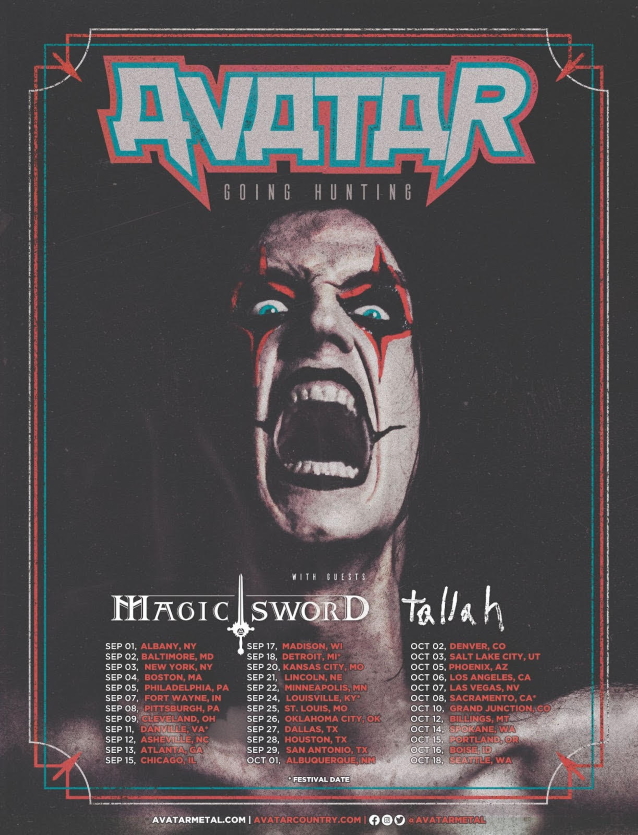