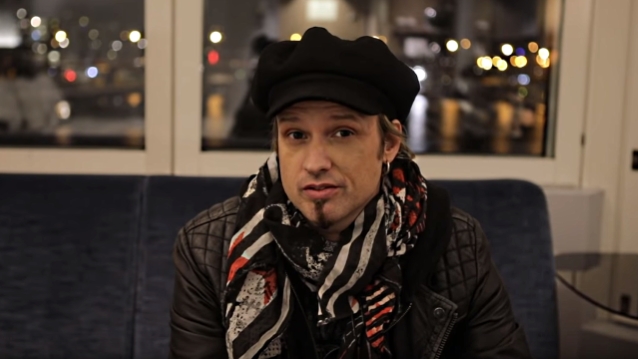 AVANTASIA mastermind Tobias Sammet (also of EDGUY) recently spoke with Tuonela Magazine. The full conversation can be seen below. A few excerpts follow (as transcribed by BLABBERMOUTH.NET).

On planning to take a break before writing the new AVANTASIA album, "Moonglow":

Tobias: "I came home from the 'Ghostlights' tour and I knew it was time for a break, because I was looking back — I had written 17 albums, done 10 world tours in 15 years or something like that, done 5,000 interviews, and I'd organized everything and was the driving force, and the driving force was running out of gasoline. I said, 'Okay, I'm going to have a break.' You have to make sure as a musician that you don't become part of the machinery, and that you don't fall into a routine where others set the pace for what you're doing. You cannot do anything just because it's in the schedule, but it automatically happens after a while. In a band, in the music industry, it's taken for granted — 'Oh, he's done an album last year, and he's done an album the year before, and an album the year before. He's going to do one next year...' No. I had no record deal — not with EDGUY, not with AVANTASIA. I felt I needed a break, so I said, 'Okay, I'm not going to do anything.' We're going to celebrate the twenty-fifth anniversary of EDGUY. We're going to do 'Monuments'. We're going to do a brief 'Monuments' tour, and I thought, 'Okay, I've got to find myself a hobby. I've got to recover a little bit and relax. What are you interested in? Oh, you could build a studio.' So I built a studio at home. Of course, meanwhile, I still had ideas, because once I had made the decision that there was no deadline, no record contract, no obligation, no schedule, I had ideas all of a sudden — which is not fair. You get ideas when you don't need them, and sometimes when you need them, you don't have [any]. I kept capturing those ideas... and all of a sudden, I had built a very nice recording studio at home. The equipment, I knew how to operate it; I had great ideas; so what do other men do? They go play with their toy train or go watch other people play football or do it themselves. I wrote music and recorded it, and I realized that it didn't even feel like work. After a while, I realized it was a new AVANTASIA album. I calmed down and said, 'Okay, now that you're recording it, you could also sell it and make some money with it [laughs], so I hired an attorney to get myself a record deal, which he managed to do. Here I am — back in the mill. [Laughs]."

On how making "Moonglow" differed from past AVANTASIA albums:

Tobias: "What was different for me this time was that I had a lot of time. There was no pressure, no deadline. Usually, I try to push pressure aside and not think of deadlines and stuff like that, and I always make sure that I don't rush — that the album is something I can live with. I always take responsibility, be it with EDGUY or AVANTASIA — it's me who is responsible in the end; it's me who's going to be blamed if something is wrong; so I always have to be happy with it, and I try to take the time that I need for it. In [this] case, it was even more time. In other cases, sometimes you simply have a deadline — you have other people who want to make money, who have spent a budget and want that budget back. The industry, nobody really pushes you, but you feel there is pressure on your shoulders, so should we rush this? Then somebody wants to book a tour, so you have to release the album before the tour is being started. In [this] case, I had all the time in the world, and I took the time. It's been two and a half years. I had so many ideas, I have half a new album already done also, because it kept flowing and flowing. The material was so embellished because there was so much time putting it together — adding little things, taking things away, reconsidering little things."

On the album's concept:

Tobias: "The subtitle of 'Moonglow' is 'Narratives Of A Misplaced Entity'. It's about a creature or an entity or a homunculus, so to speak, that is created into an environment that he doesn't find a place for himself in. The creature doesn't really get along and doesn't connect to the beautiful world around it, and doesn't really arrive emotionally in the world of the bold and the beautiful, and therefore escapes from the beautiful, light, bright, day world [and] seeks shelter in the dark and turns to the dark in the hope of being at peace with itself, and opening a door to a parallel imaginative world that grants him peace and arrival that is made for that creature. My intention was not really to create a novel. I wanted to create a coherent world, and I wanted to create ten poems that would deal with the feelings and the mental world and the experience and the points of view of that creature. To me, that concept of a story offered a great way to incorporate my personal thoughts and experience and what I felt like as a kid, and still do. I always felt a little different. I never really felt I belong in my environment. That's why I became a musician... I don't try to be offensive on purpose. I just want to be me, but I often felt that there is no place for myself, not in the metal world or not in the normal world. I think everybody sometimes feels like that."

On the album's personal nature:

Tobias: "They've always been honest, my lyrics, and heartfelt, but I think this album is more therapy than any album I've ever done before. It deals with the pressure that you have in the music industry; it deals with the pressure that you have when you don't want to live up to a pace, a schedule, when you simply don't want to let other people down, but at the same time you feel that is impossible to live up to expectations. I've been through that. I try to keep the tongue-in-cheek element — I try to see everything not so heavy-hearted... I had to let out a couple of things. I didn't want to write them blatantly open, but wrap them up in some fantastic world. It just felt good. It's like a letter you write to somebody but you never send. You get things off your chest. Who's interested in it will find something between the lines, and who isn't will just find, hopefully, poetic words. I feel very, very close to the lyrics, and it's very personal."

On deciding to cover the Michael Sembello song "Maniac", made famous by its appearance in the 1983 film "Flashdance":

Tobias: "You could bend it toward fitting into the concept. My album is about a nocturnal outsider who's only at peace with himself when darkness falls. 'Maniac' is the same thing — she's only at peace with herself when darkness falls and she's allowed to dance. Then, she's becoming herself. But the [real] story behind covering the song was, it was just meant for pure joy. I like the song [and] I wanted to do a cover version... We got in Eric Martin to have the duet character and also to have his voice. It fits that song perfectly. He said, 'It's been a huge hit over here in the '80s. Of course, everybody knows that song. I will do it.' Once the song was done, it was going to be a bonus track, but we decided because the rest of the album was so sophisticated and almost on the verge of being progressive – not everything was easily accessible — so we said, 'It wouldn't maybe do any harm to the album if we had one more lightweight track.' That's why we decided to put it on the album."