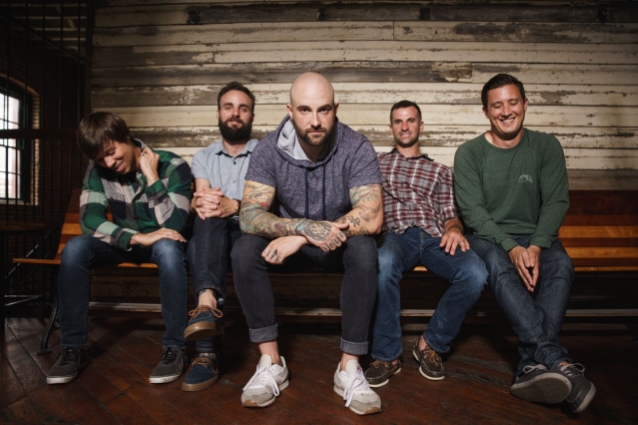 AUGUST BURNS RED vocalist Jake Luhrs recently spoke with RadioactiveMike Z, host of the Riverside, California radio station 96.7 KCAL-FM program "Wired In The Empire". The full conversation can be streamed below. A few excerpts follow (as transcribed by BLABBERMOUTH.NET).

On the band's upcoming tour, which celebrates the 10th anniversary of their third album, "Constellations":

Jake: "It's a really unique album. I really love it. The really cool, kind of crazy thing is that some of these songs have never been performed live and therefore, if they've never been performed live, we've never rehearsed them together. These songs are being played for the first time with the band now. It's kind of weird... There's definitely some parts where [it's], like, 'Whoa. Can I get a breath? Were you thinking about breathing at all, or were you just super-angry when you wrote these?'... Another song, we're going, 'Man, that lyric doesn't even make sense to me. I don't know why we chose that for a song.' It's growth — it's looking back [on] when you were younger, 10 years ago, and being like, 'Aw, that's cute. That's where you were, when you had no idea what you were doing in this area.' Then there's other parts where it's like, 'Man, that was the younger us. We've got to keep up with that.'"

On the importance of reflection:

Jake: "If you're just always looking for the future and what's tomorrow, you're not going to enjoy today, and then when you're sitting there on the death bed, you're going to go, 'Man, did I even soak up any of this? Did I even enjoy being on top of the mountain when I was?' It definitely brings back some memories. I think the band is just in awe that we [still] get to do this — that there's yet another 10-year anniversary tour that we get to share with our fans that really have been impacted by the music."

On how the group has changed in the decade since it recorded "Constellations":

Jake: "I think as a whole, the band was still in a place of immaturity... We were young and we were still being heavily influenced by the genre and the direction that the genre was going [in] when we wrote this record. We didn't really step out into ourselves until the record after that, and really, [2013's] 'Rescue & Restore'. But I think that that was a very pivotal point in our growth. [2007's] 'Messengers' was, like, 'We love breakdowns, and we love the hardcore/metal that's being written right now in this era,' so we kind of clung on to it. With 'Constellations', we started to creep a little bit outside of that [and] flash a little bit of what we were able to actually write ourselves, and not necessarily try to be heavily influenced. I think it's a great record. I think at that point, we were just really young, and we were really hungry. It's fast; it's aggressive. There's a lot of energy in that album."

On when to expect new music from the group:

Jake: "We've been working pretty hard on writing. [We're] definitely excited about the direction and the growth that AUGUST BURNS RED is going. We're going to still keep it real aggressive and heavy, but I think there's a lot of cool, different dynamics... The direction that the band is going as far as the songwriters is really kind of cool, and I think it's going to be a little bit more [focused on] the ability to digest the music — not saying that it's going to get any more simplified per se, but it's going to be easier for the listener to really grasp what's going on. A lot of times on previous albums, we've decided to go off to a place where it's very progressive or really outside the box. We've played with that a little bit, and it's really cool, because if you listen to all the albums — I'm sure every artist says this — they're not the same... This record, you can see the growth and you can see the changes. I think it's really important for us to continue to do that. We don't want to write the same record. We don't want to stop being artists. This record's definitely going to prove and show that, for sure."