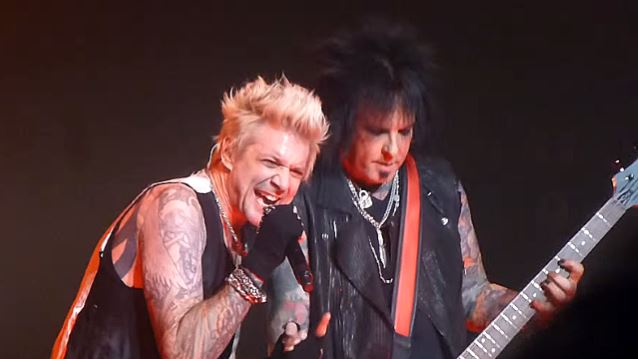 MÖTLEY CRÜE bassist Nikki Sixx invited his SIXX: A.M. bandmates James Michael and D.J. Ashba back on his "Sixx Sense With Nikki Sixx" radio show for a recap of all the action from SIXX: A.M.'s first headlining tour. Hear about the taser wars, new tattoos and tour bus hijinx in the audio clip below.

SIXX: A.M.'s "Modern Vintage" tour included a limited number of dates all across North America. While on the road, the prolific band was in the process of writing music for its upcoming fourth full-length album, which is tentatively due in 2016.

To round out its live lineup, SIXX: A.M. added drummer Dustin Steinke of BLEEKER RIDGE into the mix for the tour, as well as backup singers Melissa Harding and Amber VanBuskirk. Ashba said: "We really wanted to create a great, over-the-top live experience on this tour like all the artists of the late '60s and early '70s did who influenced our music.