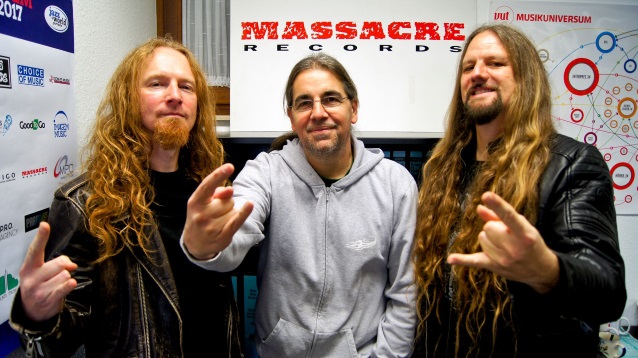 Long-running German metallers ATROCITY have inked a new deal with Massacre Records. The band is the first signing to Massacre since the label was taken over by Soulfood Music.

Comments ATROCITY frontman Alex Krull: "It's sheer lunacy: ATROCITY signs with Massacre Records — the label that accompanied the band during its most important and defining period in the mid-'90s and which released ATROCITY classics like 'BLUT', 'Willenskraft' and 'Werk 80'. The fact that Jochen Richert and his Soulfood Music team are now on board too — after Soulfood Music and Massacre Records have recently joined forces — makes it perfect! Back then, Jochen was already a successful distribution partner.

"We're looking forward to the collaboration with Thomas and Massacre Records, and we're going to emerge from the darkness very soon! Let the Swabian invasion begin!"

Adds Thomas Hertler of Massacre Records: "The return of ATROCITY to Massacre Records is almost unique in this business. After almost twenty years, the legendary Swabian connection is finally reunited again, and everyone involved is really looking forward to this collaboration!"

Part one of what was said to be ATROCITY's album trilogy, "Okkult", was released in May 2013 via Napalm Records.