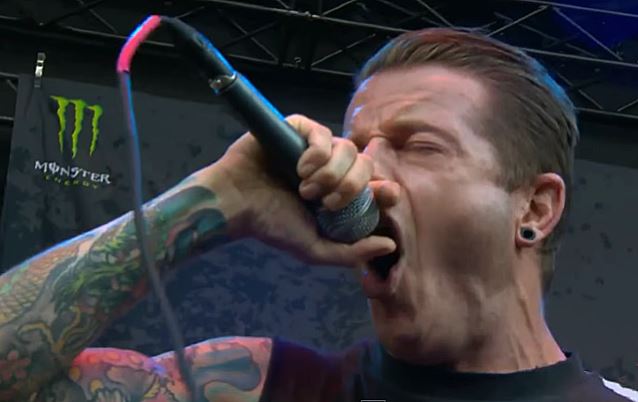 Reactivated Southern California metallers ATREYU are putting the finishing touches on their comeback album for a late spring/early summer release through the Search And Destroy imprint as part of the newly announced joint venture between Raw Power Management and Spinefarm.

Comments vocalist Alex Varkatzas in an online posting: "The lyrics for the new album have been done for a few days.

"I will finish vocals tomorrow. Absolutely no melodic vocals on my end. AMEN! Happy to get back to my roots and still bring in some new tricks."

He continued: "My brothers and I have made our best record yet. Can't wait to share it with you all."

ATREYU drummer and clean vocalist Brandon Saller recently said that the band is trying to "go back to fast and heavy" material for its upcoming CD, describing the music that has been written for the effort as "unapologetically abrasive." He went on to say: "There's nothing very radio about it. There's nothing pop about it."

He continued: "We're trying to get back to where we were when we first started the band; all we wanted to do was fucking destroy a 300-person-capacity club. We just want to go back to fast and heavy."

Saller added: "I'll say this much: it's very heavy, and a punch in the face for heavy metal fans."

In an interview with Australia's Music Feeds, Saller stated about how ATREYU decided to get back together and start working on new music again: "We kind of just started talking again. We started more seriously talking about it and decided that we wanted to dip our toes back in and inch our way back into playing again. It really felt right for all of us and with the state of the music world right now, it felt like a good time to do that."

He continued: "It was funny because a lot of people had speculation and were talking about a lot of stuff with [the celebration of the tenth anniversary of ATREYU's second album] 'The Curse', and I think that a lot people just expected maybe some 'Curse' shows to come up when we first [announced] we were coming back. And that definitely came up, but it was the kind of thing where we just felt like making music again more than anything. So it started as kind of a… The idea for that turned into having more interest in making more music. We started writing again and jamming and went into the studio with Fred Archambault, [whom] I've done stuff with with my band HELL OR HIGHWATER; he's just a great producer and engineer. So we went into the studio and recorded some music, just to see how it felt. So we went from there and announced a couple of shows here in the States. Everything's kind of fallen into place in a pretty special way, so it's a lot of fun right now."