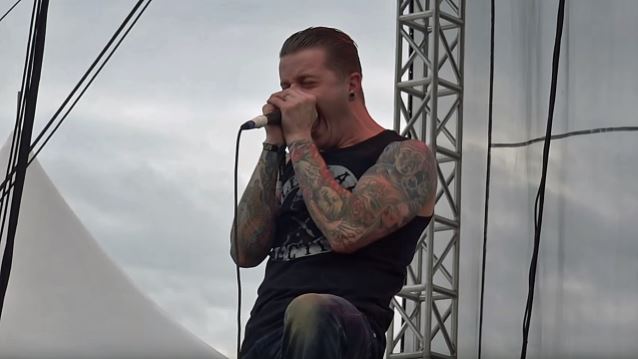 On August 6, Capital Chaos TV conducted an interview with guitarists Dan Jacobs and Travis Miguel of California metallers ATREYU at the Mountain View, California stop of this year's edition of the Vans Warped Tour. You can now watch the chat below.

Asked if ATREYU has begun work on the follow-up to 2015's "Long Live" album, Dan said: "We haven't started on anything new just yet. We have a couple of riffs here and there [that] we'll kind of just jam on occasionally, but [we have] nothing solidified yet where we're, like, 'All right, this is a full song,' or we have a release date or anything like that. But next year is definitely gonna be a year of writing and recording at some point in time."

ATREYU's sixth album, "Long Live", was released in September 2015 through the Search And Destroy imprint as part of the joint venture between Raw Power Management and Spinefarm.

Jacobs told The AU about the band's decision to go on a three-year hiatus prior to the making of "Long Live": "It was something we were all just feeling, you know, at the same time, before we even brought it out; everybody was just feeling burnt out. We've been touring so much and we just felt a bit lost. I think we all went down different paths that we didn't necessarily know whether or not it was the right or wrong path. We all just felt like we were stuck in Neverland, and all we ever did was graduate high school and soon after going on the road, we just sort of grew up in the band."

He continued: "I think everybody wanted to see what they were made of outside of the band and just who we were as individuals and not just the guys from ATREYU. I think a combined effort of so many things brought us to the point where we weren't having fun and none of us were where we wanted to truly be. We didn't want to break up or anything but we definitely needed to like go down different roads for a little bit and to become the people we've been held back from growing into so in that way, we could come back together stronger, passionate and excited again."