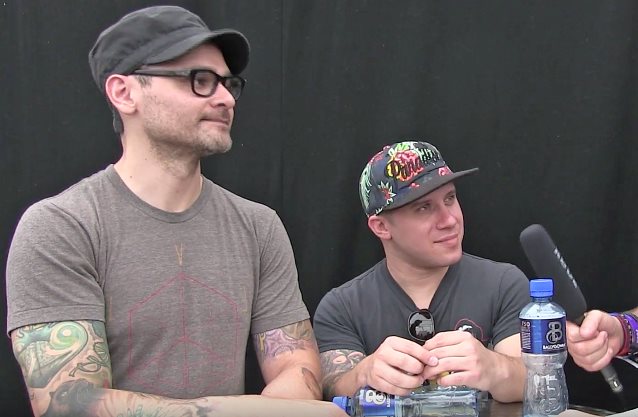 Rock 'N' Load conducted an interview with guitarists Dan Jacobs and Travis Miguel of California metallers ATREYU at this year's edition of the Download festival, which was held June 10-12 at Donington Park in Leicestershire, United Kingdom. You can now watch the chat below.

Speaking about what the members of ATREYU were doing during the band's three-year hiatus prior to the making of 2015's "Long Live" album, Travis said: "We all just kind of did our own thing. Some of it involved music, some of it was just more personal-life, family stuff. 'Cause we toured for so long that a lot of us had homes that we never lived in yet, because we were out [on the road] so much. So, yeah, it was mostly just to stop and take a breather — smell the roses, if you will. But it definitely did us a lot of good, for sure."

Asked if ATREYU has come back a stronger band after taking several years off, Dan said: "I think so, yeah. Absolutely. We've learned a lot. I feel everything that we've done — from the producers we've worked with, from the tours we've done, to the albums we've put out, to even the hiatus — the collective effort of everything, we needed all of that to truly know who we are, not just as a band, but as individuals outside of the band. So I think we all feel complete now to where we know exactly what we need to be doing, what we're good at, what we're not good at. We're just a lot more focused now because of it."

Dan and Travis also talked about how ATREYU has managed to retain its fanbase while also attracting new followers with the release of "Long Live". "You have a lot of the same old people that were coming out forever, [and they] have been, like, 'Oh, I've been watching you for the past fifteen years,'" Dan said. "We have some people that got into us right before we took a hiatus and never got a chance to see us.

"I feel, to an extent, we've kind of perfected the art of this style. We're one of the bands that first started doing it. And we just have it down. I mean, we go around watching other bands and kind of seeing where the bar's being held at. [And we think], 'All right. That's what that band's doing. They're only gonna do that? All right. All right. Well, we know what to do.'"

Regarding ATREYU's plans for the coming months, Travis said: "When we get back from this [European] run, we have a couple of weeks off and then we head out on the Warped Tour in the U.S. for about two weeks. And then we go to Australia in October. I think we might do some touring after that; it's kind of up in the air. But hopefully sometime after the New Year, or maybe before, [we'll] start writing again."

ATREYU's sixth album, "Long Live", was released in September 2015 through the Search And Destroy imprint as part of the joint venture between Raw Power Management and Spinefarm.