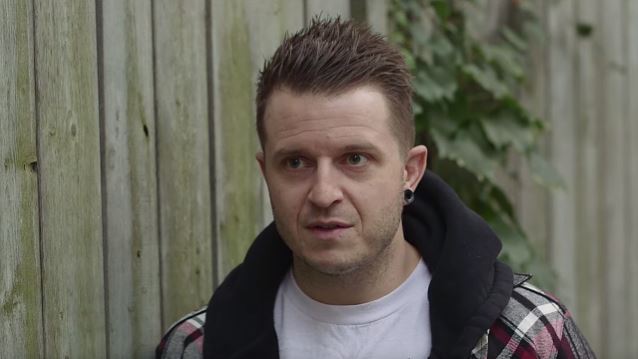 Banger TV recently conducted an interview with ATREYU vocalist Alex Varkatzas. You can now watch the chat below.

Speaking about his changing vocal style over the years, Alex said: "Since our break [between 2011 and 2014], the way that metalcore, or, like, what us and KILLSWITCH [ENGAGE] and some of these bands were doing, the way it's evolved, it's got really whiny. Like, the melodic vocals are super fucking whiny and annoying in a lot of bands, and I don't like that shit — I think that's a shitty direction. I like a KILLSWITCH ENGAGE vocal, like Jesse [Leach's] or Howard's [Jones], you know what I mean? You can sing and have clean vocals and make it really fucking powerful."

He continued: "The first couple of [ATREYU] records, that was a hundred percent aggression — [2002's] 'Suicide Notes And Butterfly Kisses' and then [2004's] 'The Curse' was very aggressive. On [2006's] 'A Death-Grip On Yesterday', I started to do a little bit of melody, but not really singing. And then, like, when you go to a major label, dude, straight up, you try to get your record done, and they're, like, 'We need to do this. We need to do that. You've gotta change this. You've gotta do that.' And you have to try to get your record done no matter what. Now we're at a point where I just get to be me and do what I want, and what I wanna do is be aggressive and emotional, but I don't wanna be emotional in a weak way; I wanna be emotional in an aggressive, passionate way. And for me, that's screaming and yelling and emoting myself not in a singing, melodic way. I don't wanna do that shit anymore."

Asked what changed for him to make him pursue an even more melodic direction with his vocals after signing with Hollywood Records in 2007, Alex said: "I don't like to do what I'm being told to do. So the truth is, I wanted to try it on [2007's] 'Lead Sails Paper Anchor', I tried it on 'Lead Sails', and it was moderately successful; 'Falling Down' was No. 3 on Alternative Rock radio and some bullshit in the States, which, I guess, if you're into that shit and you're a label guy, that's really cool. We did it, and then I wanted to kind of get away from it. And then once you do it, once you dip into that well, it's hard to break free; it's hard to go to your major label and say, 'Okay, this next record's gonna be super fucking metal' — no one wants to hear that."

He added: "I think I lost my way a little bit. I think our band had got kind of bigger and I was reacting kind of weird to it, and I wasn't comfortable with our music as much. And now I'm super stoked. Our music, I love it; it's the best it's ever been. I would fight for it. I tell people it's good. I go, 'Man, have you heard our new record? It's really good.' In the past, I would never ever ever ever say that."

ATREYU is tentatively scheduled to begin work on its seventh album next year.

The band's sixth album, "Long Live", was released in September 2015 through the Search And Destroy imprint as part of the joint venture between Raw Power Management and Spinefarm.