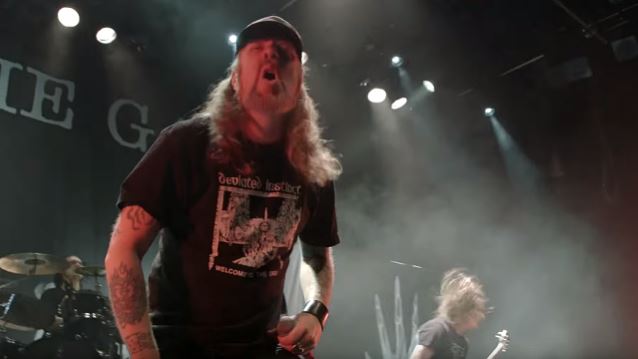 Canadian production company Banger Films ("Metal: A Headbangers Journey", "Rush: Beyond The Lighted Stage") will release the "Metal Evolution: Albums - Slaughter Of The Soul" documentary on December 25 via BangerTV.com.

Says Banger Films co-founder Sam Dunn: "I'm continuing my journey into the history of metal music by delving into the most influential metal albums ever made. Not just the usual metal classics fans already know all about, but the albums that redefined the metal underground and captivated die-hard metal fans around the world.

"Released in 1995, AT THE GATES' 'Slaughter Of The Soul' was one of those records. Its potent mix of Tomas Lindberg's screaming vocals, Björler/Larsson's melodic twin guitars, and Studio Fredman's soon-to-be-legendary death metal production changed the course of extreme metal forever and became an instant must-have in the metal underground. The record absolutely blew my mind and, 20 years after its release, remains one of my all-time faves.

"But what's the story behind 'Slaughter Of The Soul'?

"Last year, I travelled to Gothenburg, Sweden to meet with the band before a sold-out hometown gig. We talked about the making of 'Slaughter Of The Soul', the highs and lows of their early years, their break-up, reunion, and current music. We also filmed a killer live show showcasing several songs from the album. The result is 'Metal Evolution: Albums - Slaughter Of The Soul', a 30-minute documentary featuring exclusive interviews with the band, producer Fredrik Nordström and members of SHADOWS FALL and IN FLAMES, and live performance footage from the Gothenburg show.

"I'm stoked to finally release this doc and hope it gets you all excited about what's in store when we launch BangerTV as a full channel."

Canadians will get the first chance to see "Metal Evolution: Albums - Slaughter Of The Soul". If your cable package includes AUX TV, tune in on December 24 at 8 p.m. EST for its broadcast premiere.

Then, at midnight EST on December 25, "Metal Evolution: Albums - Slaughter Of The Soul" will be available to fans in every country to stream or download at BangerTV.com.