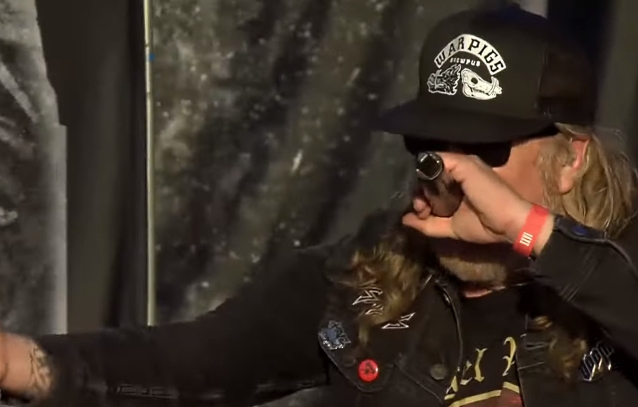 Professionally filmed video footage of AT THE GATES' entire June 29 performance at the With Full Force festival at Ferropolis in Gräfenhainichen, Germany can be seen below (courtesy of ARTE Concert).

This past April, AT THE GATES guitarist Martin Larsson confirmed that the band has commenced the songwriting process for its next studio album.

The upcoming disc will be the follow-up to "To Drink From The Night Itself", which came out last May via Century Media.

Asked by Metal Wani about AT THE GATES' plans for the coming months, Larsson said: "We've already begun dabbling in writing. It's gonna take some time, but we've started at least. And there are more shows coming. So it's looking to be pretty much filled up, the whole rest of the year."

AT THE GATES will support AMON AMARTH on a North American tour this fall. The trek will also feature ARCH ENEMY and GRAND MAGUS.

"To Drink From The Night Itself" was produced with Russ Russell (NAPALM DEATH, THE HAUNTED, DIMMU BORGIR) at Parlour Studios in the U.K. The follow-up 2014's "At War With Reality" features conceptual artwork created by Chioreanu, who previously worked with AT THE GATES on the band's last disc.

"To Drink From The Night Itself" was the first AT THE GATES album written and recorded without lead guitarist/primary songwriter Anders Björler, who departed in 2017. He has since been replaced by Jonas Stålhammar.