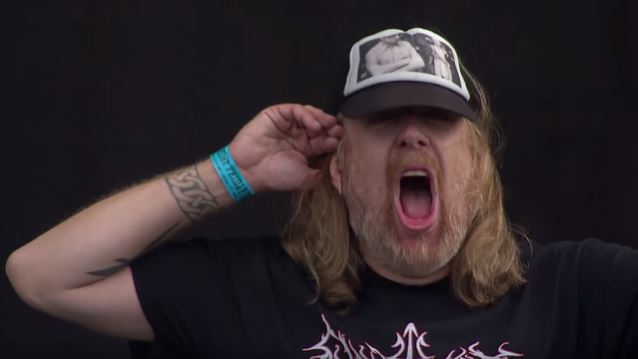 Wacken TV has uploaded professionally filmed video footage of Swedish metallers AT THE GATES performing the song "The Book Of Sand" on July 31at the Wacken Open Air festival in Wacken, Germany. Check it out below.

Asked if there are any plans for AT THE GATES to head back into the studio to begin work on the follow-up to last year's comeback album, "At War With Reality", singer Tomas Lindberg told GetYourRockOut in June: "Right now, we're just doing this, because the album took so long; it was lots of hard work for us. And we are so happy with how it's received. And we are so happy to be able to play it live. Because we don't wanna do it as a career thing; we just wanna enjoy where we are. We're enjoying this now and this is what we do. When we feel like we're done touring this record, that's when we'll sit down and see, 'Do we have any more songs?' It's very undramatic. We don't want this to get stale either. When we're done with this record, that's when we'll start thinking about the new one."

On April 6, AT THE GATES released a very special split seven-inch EP (together with VOIVOD) to accompany the band's latest tour. The EP featured the AT THE GATES bonus track "Language Of The Dead" from the "At War With Reality" sessions — previously unreleased on vinyl! — while VOIVOD contributed a new track, "We Are Connected". The EP was "double A-sided" (meaning, each band has their own, reversible front-cover side!) and came with artwork created for both bands by VOIVOD's Michel "Away" Langevin.