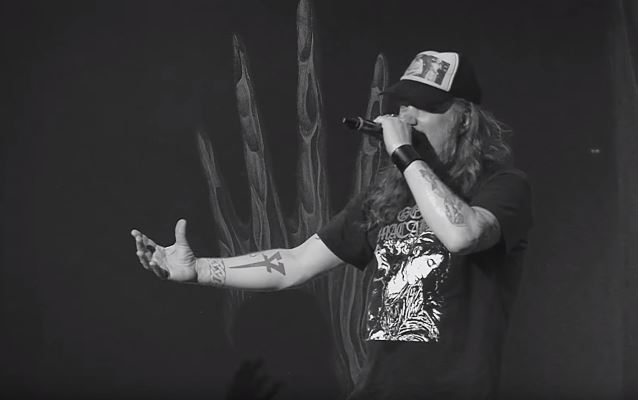 In a recent interview with EMP Live, AT THE GATES frontman Tomas Lindberg spoke about his other career as a middle school social studies teacher in his hometown of Gothenburg, Sweden. He said (see video below): "[My students are] really excited about [me being in the band]. I mean, they're not metalheads at all. They're, like, 11, 12 years old right now. But they came to a show when we played Gothenburg, and they got backstage and everything and got to take pictures with the band, and they were super excited. So, I guess, in that way, I might be the cool teacher, but I try not to be."

Asked if he is a "mean" teacher to his students, Tomas said: "No. I'm probably the good teacher, I guess. We have a good relationship. I think all education starts with a relationship with the students."

Tomas revealed in an interview with Invisible Oranges that he decided to become a teacher around 2005. He explained: "I had been teaching without a diploma for a while. It was quite a big step, because even if school is free [in Sweden], you don't really earn money [in school]. So if you have kids and everything, you have to take a step to go into education, because it's close to five years. But I really felt that it was something that brought me forward as a person and [was] the next natural step. I'm able to combine it really good with my musical [endeavors]."

AT THE GATES' latest album, "At War With Reality", was released on October 28, 2014 (one day earlier internationally) via Century Media. The CD, which sold 7,700 copies in the United States in its first week of release to debut at position No. 53 on The Billboard 200 chart, was recorded at Studio Fredman in Gothenburg and was mixed at Fascination Street Studios in Örebro, Sweden with Jens Bogren (OPETH, KATATONIA, SOILWORK, PARADISE LOST, KREATOR).