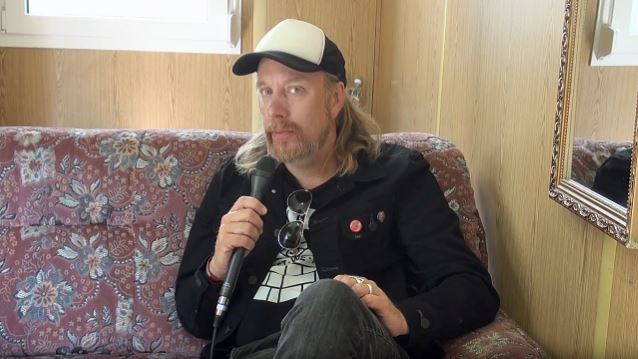 Kaaos TV conducted an interview vocalist Tomas Lindberg of Swedish metallers AT THE GATES prior to the band's July 8 performance at the Jalometalli festival in Oulu, Finland. You can now watch the chat below. A couple of excerpts follow (transcribed by BLABBERMOUTH.NET).

On the response to to AT THE GATES' 2014 comeback album, "At War With Reality":

Tomas: "This summer will probably be the last few shows we have on this album, and then we will take a break and see what's the next step for us. But definitely this went far beyond what we could expect from a comeback record and the reception of the fans and the possibility to play live as much as we have done. It was far above my expectations at least, so, yeah, we're having a great time."

On whether there are any plans for AT THE GATES to release a follow-up to "At War With Reality":

Tomas: "People have been asking, of course, but let's just say that we are taking a break to see what we are doing — gathering the forces again to see what we wanna do together. But first of all, we've been touring this album for two and a half years almost, so the first plan is just to sit back and watch that from a distance first. But definitely, I think most of us will agree that we still want to be a band. So there's gonna be stuff, but I can't say anything concrete."

On whether it's going to be harder for AT THE GATES to make the next album, being that they won't have as much time to write the material for it:

Tomas: "We are in a very favorite position. We can do almost what we want to do. We could wait ten years. We could wait one year. We can do pretty much what we wanna do, and I think people will still be interested, even if it takes three years. I'm not so worried about that, actually. But, I mean, we haven't decided yet that we are going to record a new album. There's no plans right now, but we have not said we are not going to make an album."